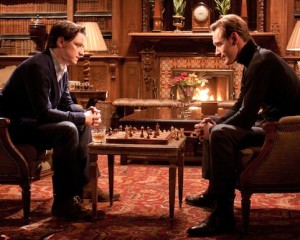 This weekend solidifies for movie producers why the smart move is almost always to go with something the audience is familiar with.  All of the top four films at the box office this weekend were sequels or prequels.  While critics and movie goers may complain of a lack of originality in theaters, producers are looking at their returns and saying “What film characters can make a comeback?”

X-MEN: FIRST CLASS top theaters this weekend with an estimated $56 million.  I would have to say this number is low for both a summer blockbuster and the X-Men franchise.  X-MEN is the only film that made less for the franchise in its opening weekend, but that was in 2000 when prices were lower.  X2: X-MEN UNITED made $85.5 million.  X-MEN: THE LAST STAND made $102 million.  X-MEN ORIGINS: WOLVERINE made $85 million.  What is to blame for this lower number?

You could make the argument that Hugh Jackman’s breakout role as Wolverine carried the franchise, and the absence of said star left many people not interested in seeing the film.  You could say that the fact neither X-MEN: THE LAST STAND nor X-MEN ORIGINS: WOLVERINE were critically successful resulting in many people having no hope that 20th Century Fox could produce another good X-Men film.  I personally think that the studio really dropped the ball with the marketing campaign.  Most of the posters for the film looked like a 5th grader on Photoshop.  The trailers were okay, but none of them really gave the audience a great idea of what the story was.

The other three out of four films in the top five just show why studios would rather make a sequel or prequel than an original film.  THE HANGOVER PART 2 finished in second with $32.4 million.  KUNG FU PANDA 2 finished third with $24.3 million.  And PIRATES OF THE CARIBBEAN: ON STRANGE TIDES and BRIDESMAIDS finished in fourth and fifth with $18 and $12 million respectively.

Next week sees the release of SUPER 8, JUDY MOODY AND THE NOT BUMMER SUMMER, and MIDNIGHT IN PARIS (Limited).  I think it is safe to say that SUPER 8 will finish number one, but how much will it make?  You can read my review for SUPER 8 Friday, but my advice for you is to see X-MEN: FIRST CLASS.  It is more creative, more fun, and in my opinion, an overall better film.

What did you see this weekend at home or in theaters?  Let us know in the comments below.