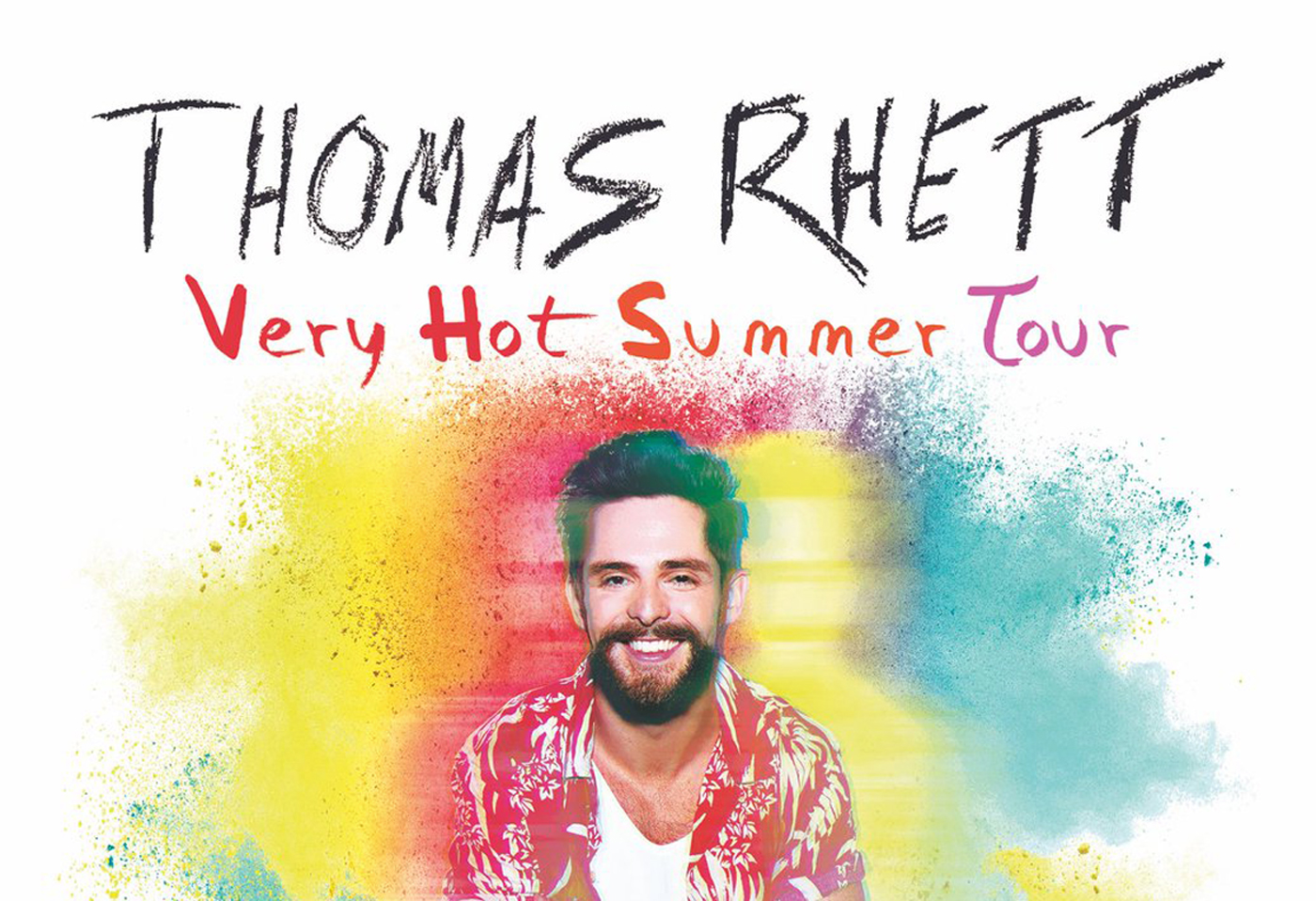 Thomas Rhett brought a” Blue out” to St. Louis for his stop on the Very Hot Summer Tour. The show was in front of a near capacity crowd at Enterprise Center. Along for the ride were Rhett Atkins, Russell Dickerson, and Dustin Lynch.

Getting the evening started was Nashville singer/song writer and Thomas Rhett’s father Rhett Atkins. The elder Rhett’s set consisted of two of his original singles from the 1990s (“Don’t Get Me Started” and That Ain’t  My Truck”) and two hits he wrote for this good buddy Blake Shelton (“Kiss my Count Ass” and “The Boys Round Here”).

Next up was Russell Dickerson, who began the frenetic pace the rest of the night would go by. Over the course of his six-song set, the performed for four singles. Playing along with the theme of the night, “Blue Tacoma” was performed. Among his non single songs, were “Girls Night Out” and “Never Get Old”.

Lynch took the stage next. In in extended set he covered a great deal of his catalog of singles since 2012 and even had time to tell the story of how he got into country music. After starting his set off with “Seein’ Red”, then “Hell of a night”, followed by “Where its At” and finally going into “Mind Reader”.  Lynch then took a step back to introduce his first single, a song he wrote about his grandparent’s love story “Cowboys and Angels”. Then he went into a musical montage of covers of the songs that made him a country music fan.

Starting off with 6-year-old Lynch falling in love with the Alan Jackson’s “Chattahoochee” next up was sixteen-year-old Lynch with Tim McGraw’s “Something Like that”, the eighteen-year old Lynch talking about his time in Nashville and how Dierks Bentley’s “What was I thinkin.” Lynch then finished out his set with his current single “Ridin’ Roads” then closed with “Small Town Boy”.

In a microcosm of the rest of the show, Thomas Rhett was shot up in the air behind the ramp to make his entrance onto the stage. From that moment on Rhett was in almost constant motion going from one end of the stage to the other, which traversed almost the whole floor of Enterprise Center. The energy Rhett displayed on stage was only augmented by the spectacular lighting that accompanied each song.  In nearly a twenty-song set, Rhett took the crowd through his life journey musically. The singer/songwriter went through his catalog of personal songs and took time to explain who/why they were written throughout the course of the night.

Throughout the deeply personal set, Rhett talked about his wife, his kids, and growing up. Al the while, keeping the set uplifting and high energy. “God Gave her”, “Get Me Some of That”, “Notice”, “Sixteen”, and “Remember You Young”, all tell the story of how Rhett became the man and artist we see today. Keeping along with the personal story telling, Rhett’s “Life Changes” encapsulates all the previous songs into one compact and poignant song.

Next up was “To the Guys Who Date my Girls”, a song cowritten with his father, a verbal heads up to anyone who wants to date any of his two, soon to be three, daughters and his expectations for them. After a brief stop, Rhett then put on “his jersey” which turned out to be a custom Blues jersey. Then introduced a duet who wrote with John Pardi, “Ain’t Nothing a Beer Can’t Fix” throughout the course the song, each of the openers joined Rhett on stage to help with the song, all clad in Blues jerseys. To close out the set, he finished with “Die a Happy Man”, “Unforgettable”, and “T-shirt.”