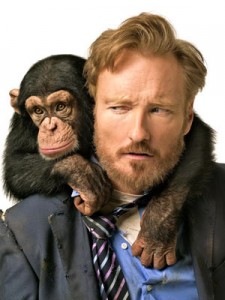 Just when you thought things were calming down in the late night landscape, Conan O’Brien and TBS announce a major deal. After months of speculation on if Conan would make the jump to Fox, the late night superstar has jumped to basic cable.

“In three months I’ve gone from network television to Twitter to performing live in theaters, and now I’m headed to basic cable,” O’Brien said. “My plan is working perfectly.”

The deal with TBS is apparently a huge improvement over the one Fox gave him. His late night show will be owner controlled, and the deal includes an eight figure sum, which apparently surpasses the biggest deal of Conan’s career.

The move doesn’t come without a bit of irony though. O’Brien’s show will be bumping George Lopez’s show to a later slot in the TBS schedule. However, Lopez is 100% behind the move, and apparently is looking forward to a strong lead in like Conan.

“I can’t think of anything better than doing my show with Conan as my lead-in,” Lopez said. “It’s the beginning of a new era in late-night comedy.”

The deal would see O’Brien return to the air on the cable network in November sometime. His contract with NBC bars him from returning anytime before September. O’Brien starts his live tour next week where he will be touring all over North America performing his show live.

Personally, I think this deal sounds great. It looks like it could be a huge deal for all parties involved. Conan gets an outlet where he can try all brands of comedy, and one where he doesn’t have to censor himself as much.  Lopez will most likely receive a good boost in his ratings. TBS will be culturally relevant for the first time in a while, and have a good chance at capturing a good part of the youth market. If TBS plays their cards right they could really start a good late night brand that competes with the major networks.