This week saw the release of a comic that literally broke the internet. The Amazing Spider-Man #700 resulted in much fanfare and critical backlash. Issue 700 marks the end of The Amazing Spider-Man and leads directly into the MarvelNOW! launch of The Superior Spider-Man.  I’m warning you now, I’m going to be talking about the issue itself and spoiling the ending, so if you haven’t read your copy and don’t want to be spoiled, please stop reading and come back later. 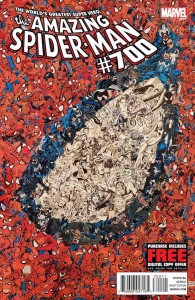 So here it is, the final issue of The Amazing Spider-Man.  If you haven’t been reading Dan Slott’s run on Amazing, you are missing out.  Issue 700 is the culmination of a story building for quite some time.  In issue 698, we learned that a dying Dr. Octopus had switched bodies with Peter Parker.  Parker was then forced to team up with arch villains to break out of jail (since technically he’s in the body of Dr. Octopus) and get his body back.

In a plan that would take way too long to explain, Pete (in Doc Oct’s dying body) and Dr. Octopus (in Spidey’s body) finally face off for the last time.  Just when you think Spidey has outsmarted his arch rival, Otto turns the tables on The Wall Crawler and Spidey’s last effort is for naught.  Doctor Octopus has won.  Or has he?  In an interesting turn of events, we learn that not only has Octavious taken over Spider-Man’s body, he now has access to Peter’s memories.  Otto lives through all of Peter’s heartache. He experiences Uncle Ben dying in his arms, feels Gwen Stacy’s neck snap through his webs, knows of all of the lives Spider-Man has saved.  He also learns the one thing that defined Peter Parker: With Great Power, Comes Great Responsibility.  Otto finally understands what Peter was fighting for.  With Otto’s body failing and shutting down, Pete makes Otto promise to keep the people he loves safe.  Otto says that he will, Peter Parker dies, and Otto Octavious is the new Spider-Man.

Writer Dan Slott has been on the book since issue 648 and has written some of the best Spider-Man stories in recent memory.  This last issue was nothing short of beautiful.  There’s a scene where Peter is in “heaven” and sees all of the people that have died in the 700 issue history of Amazing, everyone from Uncle Ben to Gwen Stacy.  When Peter has an interaction with Capt. Stacy (Gwen’s dad who was killed by Doctor Octopus in issue #90), Gwen, Pete’s parents, and of course Uncle Ben, I was literally in tears.  It’s this level of emotion that made the issue so good.  Slott gets that Peter does what he does because he has a responsibility to do so.  I’ve loved Slott’s entire run on Spidey, and I’m looking forward to what he has in store for the future.

As good as Slott has been, he’s also had great artists surrounding him.  700 was masterfully drawn by Humberto Ramos, who needs to be ranked among the top Spidey artists of all time.  Ramos used two styles throughout this issue.  When we are in the “real world”, he uses a lot of heavy inks and darker shading.  When we are in Peter’s “heaven”, the colors are muted and the inks are much lighter.  It’s a testament to Ramos’ skill.  Ryan Stegman is taking over art duties on Superior Spider-Man, but I’m hoping to see Ramos in some capacity.

It’s hard for me to believe that I have read the last Peter Parker/Spider-Man story.  In the world of comics, no death is ever final (except for Uncle Ben).  Everyone knows we will see Peter Parker back as Spider-Man, at some point.  For now, I will enjoy the ride and look forward to the eventual return of Peter Parker.

If you’ve read this issue and would like to talk about it, please leave a comment or tweet me (@JoeyButts21). Thanks again for reading, and I hope everyone had a great Christmas and a Happy New Year. See ya in 2013!