Comic Pick of the Week: Hawkeye #1

Pick of the Week: Hawkeye #1
Written by Matt Fraction
Art by David Aja 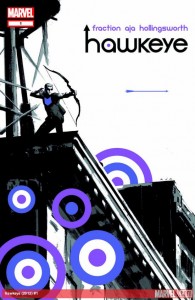 There are some weeks when it’s insanely hard to pick just one book to review.  This was not one of the those weeks.  Hands down, the best thing I read was Hawkeye #1.  Hot off the heels of the mega smash The Avengers, Marvel launched this new title starring their resident arrow slinger.  The character has been given a clean slate.  Hawkeye is a “street level” book (much like Daredevil and The Punisher) meaning Clint Barton (Hawkeye) is a normal guy – no powers, no hammer, no fancy suit.  He’s just a hero who can shoot arrows VERY well.

This book takes a  human approach to the superhero world.  Clint doesn’t live in a fancy high rise.  He lives in a shitty apartment run by a Russian slumlord.  Clint doesn’t have a healing factor or unbreakable bones.  When he gets into a fight, he’s going to feel it for the next couple of days.  He’s an ordinary guy trying to keep up with super soliders, gods, mutants, and a funny little genius bitten by a radioactive spider.

Matt Fraction is one of Marvel’s top talents.  He’s writing such books as Invincible Iron Man and The Defenders. As great as he is on those two titles, this is where he thrives.  He’s able to mix humor and action perfectly on this title.  I’ve said before, but you can always tell when a writer has a passion and love for the character he or she is writing.  You can feel it here.  Fraction has the ability to make Hawkeye seem human and likeable.  He writes Clint as the loveable loser to which we all can relate.

Shouldering the art duties is David Aja, one of my favorite artists today.  His work is very reminicent of David Mazzucchelli (Batman: Year One) and lends well to the street level feel of this book.  His character models aren’t all jacked up with muscles or crazy costumes.  They look like normal people which is a nice change of pace when most books have over the top characters.

If both Fraction and Aja stay on this book, be prepared to read a lot a reviews about Hawkeye. It has massive potential.  If you like Daredevil, The Punisher, Gotham Central, or Criminal, this book is up your alley.  Go to your local comic shop and pick this up.  It’s worth your 299 cents.  If you dig it, I recommend you check out Fraction and Aja’s first collaboration, The Immortal Iron Fist.  It’s one of my favorites.  Who doesn’t love a good kung fu book?