CLASH OF THE TITANS is Out On DVD & Blu-ray Now! Enter to Win a FREE Copy!

CLASH OF THE TITANS is available on DVD & Blu-ray Now!

Enter to win a FREE copy! 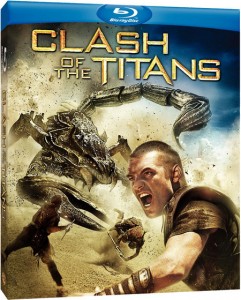 The ultimate struggle for power pits men against kings and kings against gods. But the war between the gods themselves could destroy the world. Born of a god but raised as a man, Perseus is helpless to save his family from Hades, vengeful god of the underworld. With nothing left to lose, Perseus volunteers to lead a dangerous mission to defeat Hades before he can seize power from Zeus and unleash hell on earth. Leading a daring band of warriors, Perseus sets off on a perilous journey deep into forbidden worlds. Battling unholy demons and fearsome beasts, he will only survive if he can accept his power as a god, defy his fate and create his own destiny.

In order to enter the contest, become a fan of ReviewSTL on Facebook and post a comment on the ReviewSTL page about why you want to own CLASH OF THE TITANS. NO PURCHASE NECESSARY. PLEASE REMEMBER TO READ THE RULES!

DON’T FORGET! CLASH OF THE TITANS is on DVD and Blu-ray Now!