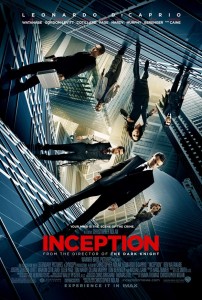 People are probably tired of hearing me say it, but Christopher Nolan has rarely taken a misstep in his career. He has yet to make a film I have seen that isn’t a solid bit of filmmaking. It looks like he has a really good shot of continuing his streak with Inception.  The film boasts one of the most impressive casts lists out of any film in 2010. It is really hard to believe that this director’s ticket to mainstream success was a superhero film. If you had told someone in Hollywood 20 years ago that superhero film would make A-list stars line up to work with a director, would anyone believe you? Probably not.

Dom Cobb is a skilled thief, the absolute best in the dangerous art of extraction, stealing valuable secrets from deep within the subconscious during the dream state when the mind is at its most vulnerable. Cobb’s rare ability has made him a coveted player in this treacherous new world of corporate espionage, but it has also made him an international fugitive and cost him everything he has ever loved. Now Cobb is being offered a chance at redemption. One last job could give him his life back but only if he can accomplish the impossible — inception. Instead of the perfect heist, Cobb and his team of specialists have to pull off the reverse: their task is not to steal an idea but to plant one. If they succeed, it could be the perfect crime. But no amount of careful planning or expertise can prepare the team for the dangerous enemy that seems to predict their every move. An enemy that only Cobb could have seen coming.