Chevy Volt Gets 230 Miles Per Gallon, But Costs Up Front 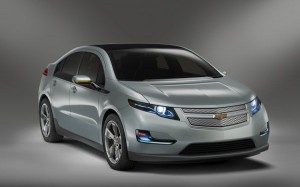 How would you like to go on a road trip, and spend $5 to fill up your tank each way? For drivers like myself who took road trips last summer, that sounds like a mean joke. I spent over $70 to fill my tank multiple times, and I was only driving from St. Louis to Chicago. Well, fear no more – the new Chevrolet Volt electric car has been announced to get an incredible 230 miles per gallon! And that’s CITY DRIVING!

This all sounds too good to be true, so is it? Not necessarily. The car will get great millage, but it will cost you. The Chevrolet Volt, set to launch during 2010, will cost around $40,000. But at least the purchase would qualify you for a $7,500 tax credit. GM is hoping to win over the market share that has adopted the Prius – Toyota’s popular “green” driving option. Although the Prius only starts at $22,000, it only gets a rating of 51 mpg (city driving). Not even close! So the Chevy Volt will pay for itself over time. The Volt can go 40 miles before it uses its small gas engine to recharge the battery.

What do you think about the Chevrolet Volt? Would you spend the extra money to save on fuel?