…well, if you count the one game the Cardinals opened the season with in Miami.

Concluding a rainy opening weekend here in St. Louis, the Cardinals won by a touchdown this afternoon against the rival Chicago Cubs, allowing them to take the rubber match of the series and avenging for a 9-5 loss on opening day. The Cardinals opened the week in Cincinnati by taking the first two games before dropping the finale 4-3 in the bottom of the ninth. 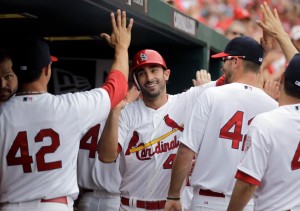 Expected to be a bench player while Allen Craig rehabs, Carpenter is making a pretty strong case to stay on the roster even when Craig comes back. Although he’s technically played in eight games, he’s gotten just 23 plate appearances, but he’s made the most of them. After a five RBI outburst Sunday that left him just a double shy of the cycle, Carpenter is now tied for second on the team in RBI with 10. David Freese has 11 and Yadier Molina also has 10, but they’ve done so in 33 and 38 plate appearances, respectively. Carpenter has a slash line of .409/.417/.818 and would lead the team in slugging if he had enough plate appearances (3.1 appearances per team game is required, so he’d need 31 to qualify). Lance Berkman’s slated to return from a calf strain Tuesday, but if Mike Matheny’s prone to playing a hot hand, Carpenter could get another start against the Reds.

Starting Pitching (for the most part)

With the exception of Adam Wainwright, every Cardinals starter has registered a win and a quality start. In this still-nascent season, the two best starters for the Cardinals have been…Jake Westbrook and Kyle Lohse? Lohse has done exceptionally well and outdueled a pair of top-end starters, registering a miniscule 0.53 WHIP (Walks + Hits per Innings Pitched). Westbrook has been the best surprise thus far. After a mediocre 201 that left him out of the rotation for the post-season, he’s sprinted out of the gate and is 2-0 with a 0.64 ERA. Lance Lynn has filled in well for Chris Carpenter, going 2-0 and throwing 12 innings in his two starts while yielding just a 1.50 ERA.

Overall, the team was expected to have a strong lineup, even without the presence of Albert Pujols, and through the first nine games, the team was ranked first or tied for first in average, slugging, on-base plus slugging, home runs, and RBI. The best part of this? It’s incredibly balanced. The team is also more aggressive on the basepaths, having stolen six bases already in eight attempts. This pace would put them at 97 for the season, a far cry from the days of Whiteyball, but a far better showing than last year.

I know, I know, he’s coming back from Tommy John. I’m aware. He’s still had two rough outings thus far, and his velocity is way down. I was fortunate enough to go to Opening Day (thanks, Lauren!), and his heat hovered right around 90. He claims his arm feels fine and it’s just a matter of getting it back into shape, and I’m willing to give him the benefit of the doubt.

Tyler Greene just hasn’t appeared comfortable so far. In what could be his final chance, he’s yet to find a groove. He committed his first error of the season today, and he made another gaffe yesterday that fortunately turned into a fielder’s choice. He did make a solid diving play today, so I’ll give him that. At the plate, he’s hitting .200/.273/.250 and has struck out six times in 21 plate appearances. He’s expected to play an integral role in the infield this year, and he’s out of options, so it’s unlikely the Cardinals will demote him unless he does absolutely horrible, but if he doesn’t step it up, this could well be the last year you see Tyler in a Cardinals uniform.

The Birds sit at 7-3 and 2.5 games ahead of Houston(!). Obviously there’s a full grind ahead, but it’s a far better start than last year, when they were 4-6 after the first ten games. They host Cincinnati Tuesday, Wednesday, and Thursday before traveling to Pittsburgh for three.

Well, my team color allegiance is pulling a Doppler effect, and the wavelengths are now experiencing a blueshift (Doppler effect is a physics term; as the source of a wave travels away from the observer, the wavelengths experience a shift towards the red spectrum; as the source travels closer, it shifts towards the blue. I figured it was an appropriate term for St. Louis sports fans nowadays…I’m a loser.). After dropping the first game of the series in double overtime 3-2, the Blues managed to shut out the Sharks last night, 3-0. Patrick Berglund picked up both goals for the team Thursday night, while Vladimir Sobotka, David Backes, and Andy MacDonald lit the lamp last night.

One concern is the status of Jaroslav Halak, who was accidentally run over by Barret Jackman and had to leave the game last night. Brian Elliot came in and preserved the shutout, but the Blues have recalled Jake Allen from Peoria, and Halak has already been ruled out for the game tomorrow in San Jose.

Last night was a pretty physical game, as anybody watching it can attest. The final minute of the game was particularly intense, as it led to an all-out kerfuffle between the two teams at the final whistle. Vladimir Sobotka got in on the action, and Roman Polak absolutely DESTROYED Justin Braun.

Tony Twist put it best: Braun finished a distant third in that one.

Just look at the penalty sheet for the final minute alone.

92 minutes of penalties in just 48 seconds of hockey.

The Blues travel to San Jose tomorrow to continue the series. This has been an incredibly entertaining post-season league-wide.

Pittsburgh, considered a favorite to win the Cup, finds itself on the brink of elimination after losing today 8-4. Marc-Andre Fleury has allowed 17 goals in less than 180 minutes of hockey, and head coach Dan Bylsma has decided to put a cardboard cutout in net the next game.

Nashville leads Detroit 2-1 after pulling off its first-ever playoff victory in Detroit today.

Ack. So much. Sports awesomeness overload. Motor skills…lacking. Will report back soon.