Captain America Gets His Love Interest in Haley Atwell

Speculation has been high for a while on Captain America: The First Avenger especially since all the main male roles had been filled, who would be playing Steve Rogers’ love interest Peggy Carter? Marvel Studios has announced today the role will be filled by British actress Hayley Atwell.

Here is the press release from Marvel: 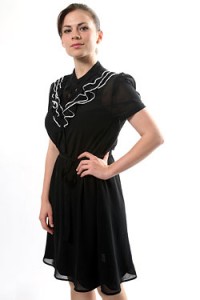 Marvel Studios announced today that Hayley Atwell has been cast to star as Peggy Carter in the studio’s highly anticipated movie CAPTAIN AMERICA: THE FIRST AVENGER opposite Chris Evans. In the early comics, Peggy Carter fell in love with Captain America while they fought together in the war effort. The character will be updated for the feature adaptation. Joe Johnston will direct the film penned by Christopher Markus & Stephen McFeely.

Marvel Studios’ Kevin Feige will produce CAPTAIN AMERICA: THE FIRST AVENGER. Alan Fine, Stan Lee, David Maisel and Louis D’Esposito will executive produce. The film will be released in the US on July 22, 2011 and distributed by Paramount Pictures.

CAPTAIN AMERICA: THE FIRST AVENGER will focus on the early days of the Marvel Universe when Steve Rogers volunteers to participate in an experimental program that turns him into the Super Soldier known as Captain America.

Atwell will next be seen in PILLARS OF THE EARTH, the 8-part miniseries premiering July 23 on Starz and the TV series THE PRISONER. Her film credits include THE DUCHESS, BRIDESHEAD REVISITED and CASSANDRA’S DREAM.

In addition to CAPTAIN AMERICA: THE FIRST AVENGER, Marvel Studios will release a slate of films based on the Marvel characters including the highly anticipated sequel, IRON MAN 2, starring Robert Downey Jr. and Gwyneth Paltrow on May 7, 2010, THOR on May 6, 2011, and Marvel Studios’ THE AVENGERS on May 4, 2012.

Atwell is represented by CAA and United Agents.

I don’t really know much about Atwell, so I can’t make much of a judgment.  To be honest I am just glad that the major roles have all been cast, and now I’m just ready for the first images to come out after shooting starts. What are you looking to most about the movie? Let us know in the comments.