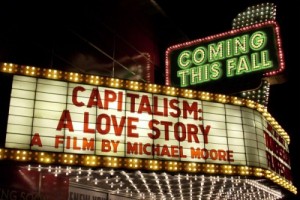 Michael Moore’s new film Capitalism: A Love Story won’t win you over if you aren’t a Moore fan, which is disappointing because many of the points he makes are very valid. In a day and age where corporate greed runs rampant stories like this need to be told, but if no one listens what does it matter?

Capitalism: A Love Story is a documentary that is very much the spiritual sequel to his first film Roger & Me, where he showed the impact of a GM CEO’s decisions which led to the downfall of his hometown Flint, MI. Moore follows along the same line in this one, although this time with a much broader scope. We do visit Flint a few more times in this film, but the impact is no longer just in the production towns of the American auto industry, it is everywhere. With our recent economic downturn, the material stings like alcohol on an open wound. Moore is great at pointing out corruption in the system.

The problem Moore runs into is his own ego, which has kept many from absorbing his viewpoints. When Moore goes to visit the GM headquarters to talk to current CEO he is turned away and we lose 5 minutes that would have been spent much more preciously on more talk points. Instead, we are treated to a scene of ego boosting where Moore seems to hold his idea of champion of the little people a little to highly. In yet another scene Moore goes to banks, and demands money owed to the American people that they took from us in the bailout. In these same scenes he goes to make a “citizen’s arrest” of bank officials from companies such as CitiBank and AIG. None of these scenes serve any other purpose than to stroke Moore ego which is almost as big as his waistline. There is no new information gathered from these pieces, and work only to upset the people Moore should be trying to convince.

I think what frustrates me so much about this film is that so many of the points are valid, and are need to hear on a large scale. However, due to Moore’s own deficiencies of not being able to take a backseat to the issues at hand destroy the film. The only people who are watching his films are the people who already share his viewpoints. It becomes a self congratulatory exercise which serves no purpose. People should know how for years regulations have been stripped from Wall St, that credit default swaps ran wild, and that even today many of the people who allowed these things (and profited) still hold high offices within our government.

Moore does have a gift for laying out information in such a way that keeps you glued to the screen, the only times I found fault with the film were during his self serving, camera hogging scenes. I really do recommend any American seeing the film to open their eyes a bit more to the atrocities that are committed every day against the other 99% of the American public. This film is a good jumping off point in your self education in our financial future.