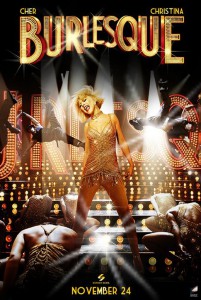 Christina Aguilera makes her big screen debut as Ali, an Iowa farm girl who’s just landed in the big city (Los Angeles) when she comes across the club Burlesque. As an aspiring singer (she is played by Christina Aguilera, after all) she’s immediately entranced by this hyper-stylized throwback to the days of glittery costumes and speakeasy chic. But in order to get her big break, she must first impress the club’s owner: Tess (Cher). However, there’s one catch – only Tess sings. All the other girls lip-synch. Now, just to be clear (and so the men can stop reading now) Burlesque is not a strip club. The club, like the film, isn’t selling ‘sex,’ it’s selling ‘sexuality.’ It’s a subtle but important distinction. Think Showgirls without all that pesky nudity.

Based on that paragraph alone, you can probably complete the plot synopsis like a book of Mad Libs. Ali will wow the crowd when an emergency necessitates her filling-in. The club will have to be saved from the brink of financial ruin. Ali will have to choose between the struggling songwriter (Cam Gigandet) and the uber-wealthy real estate tycoon (Eric Dane). But musicals have a long and rich history of weak storylines. A movie can overcome that if the production numbers are strong enough. Unfortunately, they’re not in Burlesque. Well, I take that back. Maybe they are. The film is edited in such a scattershot manner that it’s almost impossible to determine. The film goes to great pains to tell us how people come for the great dancing. But the camera never focuses on the dancers for any extended length of time. Let’s not forget, these performers aren’t even singing. They lip-synch their entire performances. (And yet they have house band. Go figure.) So why, when we live in a world where every third show on television is a dance competition, do they feel compelled to obscure the very premise of the entire film? Clearly the talent is out there.

Aguilera is fine, though all the role really requires is her voice and her cleavage. Both are excellent. And Stanley Tucci, as the club’s costumer and stage manager, is (as always) a bright spot. Cher’s part appears to be tailor-made. She plays the brassy and brash club-owner with the heart of gold. It’s the sort of role she could do in her sleep. But her extensive plastic surgery proves to be distracting. At times it looks more like Cher has been replaced by a Cher-impersonating drag queen. Her face has been stretched and/or botoxed to the point of incapacitation. At this point capturing the movement of her facial features actually requires fewer frames per second than the average Speed Racer episode. But her voice is still great and her performance is fun to watch.

The songs are solid but nothing spectacular. And really, three songs with “burlesque” in the title is tad bit of overkill. Eventually the movie descends into a mish-mash of musical clichés. There are few witty lines but most of it falls flat. If the film has any longevity it will be as camp, though it has a winking self-awareness that seems to undercut its potential camp appeal. It’s not a classic misfire in the way that a film like Showgirls was. Oddly, that’s disappointing.