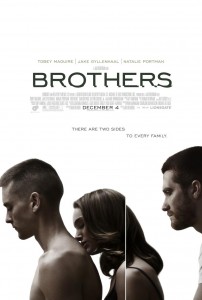 Tobey Maguire and Jake Gyllenhaal play brothers in the aptly titled new film Brothers. They are, respectively, Sam and Tommy Cahill. The brothers, as cinematic siblings tend to be, are polar opposites. Sam is an upstanding overachieving military man with a wife, Grace (Natalie Portman), and two daughters. Tommy is an ex-con fresh out of prison. When Sam is killed in action while in Afghanistan he leaves behind a loving wife, two adorable daughters and a father (Sam Shepard) who thinks the wrong son died. But much to his surprise Tommy steps-up and steps-in, becoming a de facto father figure for his nieces and perhaps a little something more his sister-in-law. However, Sam isn’t dead; he’s being held captive by Taliban forces. Typically, plot developments like those would be chock-full-o-spoilers but since the trailer shows you all that in its first 10 seconds, I don’t feel like I’m giving too much away. [morelink]

As the movie progresses, it tells both stories simultaneously; toggling back and forth between Sam’s imprisonment/torture and Tommy and Grace’s blossoming relationship. The two are drawn together as Tommy attempts to be a better man. But both are conflicted as they begin to develop feelings for each other. Meanwhile, Sam is subject to violence and forced to do unspeakable things. (They’re doubly “unspeakable” since it’s about the only key plot point that the film’s trailer doesn’t disclose.) Of course, everyone knows that Sam will eventually return home (he’s being played by Tobey Maguire, after all) and all hell will break lose. And it does.

As the film segues into its final act, Maguire gives a showy performance but not a very original one.  We see him driven mad by the things that happened abroad and the things he suspects happened at home.  Much of the tension is derived from people dodging questions that don’t need to be dodged.  The characters won’t give straight answers to each other for no other reason than the fact that it served the needs of the screenwriter.

Brothers is an interesting, if conventional, film hampered by its own ambition. The film attempts to be too many things: romance, comedy, family drama, war film, psychological thriller. The performances are strong (though Maguire’s borders on cliché in the final third).  One performance of particular note is Bailee Madison as Sam and Grace’s eldest daughter Isabelle. She repeatedly conveys multiple emotions with a single look. She’s torn between her grief and the affection she feels for Tommy, her new father figure – who’s apparently much more approachable than his brother ever was.  Unfortunately, it’s not enough to lessen the impact of the whiplash inducing screenplay as it bounces back-and-forth in location, mood and tone.