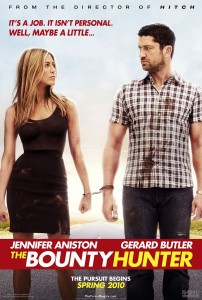 Bounty Hunter is the latest effort to sell a formulaic concept with the help of an A-List cast. Nothing you see on screen is funny enough or innovative enough to warrant the price of admission.

Down on his luck ex-cop turned bounty hunter, Milo (Gerard Butler) is handed a once in a lifetime opportunity when the bounty for his ex-wife, Nicole (Jennifer Aniston), comes through. Nicole has skipped out on bail to follow a lead on a suicide that might actually be a murder involving dirty cops.  Once the two realize they are dealing with more than just skipping bail, they must quickly come to terms with their relationship, and possibly even find a way to reconcile.

Most likely you will go into the Bounty Hunter, and will automatically be able to guess every twist and turn. The film itself is not so dissimilar to last year’s Gerard Butler romantic comedy, The Ugly Truth. All the pieces for a crowd pleaser are there, but they never seem to match up. The film bounces along at a steady pace, filled with what should be heavy beats of laughter, but most of it falls flat. Judging by the full crowd reaction from the screening I went to, the film is not as funny as it likes to play itself to be.

It is quite sad, because you can see that Butler and Aniston have decent on screen chemistry, which basically amounts to the fact that they are two very good looking people. There just really isn’t much to hold onto. The characters are cute enough, but you need a solid comedic background to sell the premise, and the two never really rise to that occasion. The script leaves us to stare blankly at the screen as we try to desperately grasp for some semblance of real connection between the two characters.

I’m still left feeling flat by Butler, who has yet to impress me in any romantic comedy he has been in. His American accent is quite atrocious, and he seems to think he plays a pretty good jerk. Although, not many people want to see a guy who is a jerk who succeeds in the end.

For as oft putting as I feel Butler is, Aniston is the same amount of boring.  She seems to be still playing Rachel all these years later, and we are treated to that enough on syndicated TV every day. Aniston’s greatest achievement in this movie is not balking at having to wear heels, a pencil skirt, and a low cut top for the entire film.

I can’t recommend Bounty Hunter, but I can’t deny that some people will go and see it, and possibly even enjoy it. I might be selling it short, it isn’t a completely awful film, but it isn’t nearly as entertaining as it should be. There are much better films that use the same formula with a lot better results.

The Bounty Hunter is a blah effort that while not absolutely horrible, is no where near being good either.  The film’s identity crisis only fuels this mediocre effort at best.

Milo and Nicole are ex-husband and wife and haven’t seen each other since the divorce.  Nicole works for a local paper and is on the brink of breaking a story about a potential faked suicide that runs deep with implications to who is involved.  Nicole has a court appearance for assaulting an officer and when she skips on bail at her trail hearing chasing a lead a bounty is put out on her head and that is where Milo comes in.  An ex-cop, Milo is now a bounty hunter and getting paid five grand to bring in his ex and help pay off his sizeable gambling debt, that has goons hunting him while he hunts bounties, is sweet news to his ears.  The two finally catch up to one another in Atlantic City but the trip to jail becomes complicated as each of their enemies begins throwing multiple obstacles on their path back to NYC.

Now to set all that up it takes about 30 plus minutes, or at least it felt like that, and we didn’t really learn a whole lot.  The detective story side of things has beats few and far between and the film has a real problem figuring out what it wants to be.  It’s one part romance, one part detective story, one part rival ex’s comedy, one part on the run road movie, but it never successfully blends all of this together into a single narrative or find any rhythm whatsoever.  Added on top of this, none of these plots is all that interesting either.  Gerard Butler and Jennifer Aniston have a decent chemistry and back and forth as Milo and Nicole but there is nothing unique or interesting for them to do.  The action in the film is also extremely flat with a climatic scene being about as simple as one can imagine, a car chase that looks like it is at 5 MPH, and nothing much else in between.  The film just doesn’t do anything well.

Added on top of this, Andy Tennant’s film doesn’t make a whole lot sense when it is all said and done.  One of the characters vindicated at the end is done so with out any real evidence to do so and we are just taking his word for it, the improbability of Milo rolling a seven or eleven 5 times in a row is ridiculous, there are multiple times where the film grinds to a halt for a “moment” when they should be running for their lives, Milo’s debt plot is not wrapped up in the slightest, the bad guy gets away without being seen by one of the leads in broad daylight as he crosses about thirty yards of roadway, you will find yourself shaking your head at things like this a lot.  The film is just sloppy and seems way too pieced together and convenient time after time.  These sloppy moments always pop up when the film seems like it might be getting its stuff together only to crumble back into mediocrity after a glaring plot hole rears its head.  Also, don’t make a joke about how Jennifer Aniston is apparently to old now to have been a model, she is gorgeous and is a model, how does this joke make sense or is at all funny?

The actors in the film, the leads in particular, do an alright job and seem to at least be having some fun and are trying to capture the spirit the film intended, but the plot and unoriginality doesn’t allow it to translate to the viewer.  Butler’s accent is a little wonky but he is the most likeable character of the group.  Jeff Garland is in the film far too short a time as Milo’s boss and he has the best lines in the picture.  Jason Sudeikis is oddly funny and overcomes his weakly written character with his charisma.  And other than that there isn’t a whole lot worth mentioning.

In the end, The Bounty Hunter isn’t really worth your time and the more and more I think about the movie works less and less.  Again, it’s not an awful movie, but it fails to do anything it tries to do most of the time and is really poorly written.  The actors can’t save it and Tennant brings nothing new or interesting to the table.  The romance stuff is the closest to anything working well in the picture but there isn’t enough focus on it to really make it stand out.  And lack of focus is really the problem here, the film seems to have no idea what it wants to be and that isn’t a good thing.

The Bounty Hunter is a D-