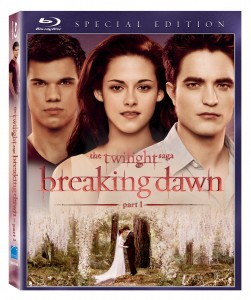 If you are a fan of The Twilight Saga, there is no doubt that you have been eagerly anticipating the release of ‘Breaking Dawn Part 1.’ If you pick up a copy of the Special Edition DVD or Blu-ray, you will not be disappointed.

First of all, I love the main menu page. It’s very sleek, and I love the way it moves from character to character. It almost looks like it is in 3D, without having a 3D TV. The video quality of the Blu-ray version is incredible; the picture is very crisp, and the colors are bright and vibrant.

There are a lot of special features that will please the “Twihards” on here. There is audio commentary by director Bill Condon, where he talks about the actors and how the movie was made. He talks about how hard it was to get some of the scenes just right, as to not upset fans of the novels. There is also a 6-part section in the special features about the making of the movie.

One of the most interesting special features was the pregnancy section, which shows the special effects for making bella look so skinny. Even though it looked pretty realistic, every shot when she looked like that was a visual affect. She started weighing 110 lbs. and ended up weighing 70 lbs. in the end. They talk about it being a major challenge when making the film, and how they spent a lot of production money and time for this process. At one point, the producers had to find a faster way. They found out what her skull’s bone structure is and used a technique called “shrinkwrap.” They didn’t use a film student or photographer, but a technical artist who is familiar with facial structures and human proportion. They used prosthetics for her cheeks and chest.

One section that Team Jacob will enjoy is “Jacob’s Destiny,” which tells how he feels throughout the movie. It talks about how Jacob imprints on the baby, and the resulting fallout with the Wolf Pack. Since this movie was mostly about Bella’s wedding and pregnancy and Jacob, it’s nice for the Jacob fans to have their own section.

There is another section on the special features called “Bella and Edward’s Personal Wedding Video,” which shows all the wedding planning and details. It includes the beautiful wedding decor, and the silly reception speeches. This was a neat touch for the fans that can’t get enough of the big wedding. It really shows the wedding from a different angle, and has a home video feel to it. The way it is filmed, you feel like you are actually watching Robert and Kristen’s wedding.

The last of the special features on the special edition DVD and Blu-ray is called “Jump To,” where you can go to specific characters and main events like the honeymoon and pregnancy. It’s nice that you can go to your favorite scene easily, instead of fast-forwarding through the main feature.

There is no doubt that you are going to love the movie if you are a fan of the series. It’s icing on the cake if you are the type of person that likes to check out the special features, as there are a lot of great ones on the disc. If you haven’t had a chance to pick up “The Twilight Saga: Breaking Dawn Part 1,” it is out now on Special Edition Blu-ray and DVD!