Blu-Ray Review – “Superman vs. The Elite” 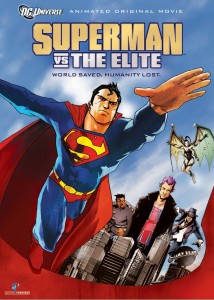 I will continue to praise the work by Bruce Timm and everyone else involved in the DC Universe Animated Films.  While I do not love all of the films, some of them are pretty spectacular including “Wonder Woman”, “Justice League: A New Frontier”, and “Batman: Under the Red Hood”.  I am not a huge Superman fanboy so when they announced “Superman vs. The Elite” I was not overjoyed, but I knew I would check it out.  After watching the film last night, I can fully recommend “Superman vs. The Elite” as one of my favorite DC Universe Animated Films and one of my favorite Superman films I have ever seen.

“Superman vs. The Elite” is based on Action Comics #775 titled “What’s So Funny About Truth, Justice, and the American Way?”  The story finds Superman facing a society that believes his moral values are outdated.  They feel it is no longer enough just to stop these criminals and put them in jail.  Some feel that Superman needs to kill these criminals so that they can never hurt anyone ever again.  Anyone who knows the character of Superman at all knows that this contradicts everything he stands for.

Soon the world is introduced to a new group of super powered heroes.  The Elite is led by Manchester Black who posesses telekinetic powers.  He is joined by Coldcast, a hulking brute who can manipulate energy, Menagerie, whose body has been taken over by an alien force that she can control, and Hat, a magician who is only concerned with physical pleasures.  The Elite wants to stop villains and criminals, but they are willing to kill to put an end to their madness.  Is this what the mass public has been clamoring for?

Obviously from the title alone, the viewer knows that this film is going to end in a clash between Superman and The Elite, but the reason why I loved this film so much was not because of the huge climactic clash or the smaller set pieces building up to it.  This story is a very realistic look at how society is.  It forces the viewer to think about their reactions to  events that have happened in our life.  What were you thinking regarding the terrorists after September 11th?  What does that say about us as a people if our initial reaction is to kill those responsible?  This is not a question that I am looking to answer here nor do I think you want to hear my opinion.  But I think this is important heavy stuff from an animated comic book story.

The biggest complaint on just about every other review you will read regarding this film is that the animation is bad.  Yes, the animation is extremely basic and probably saved them a hell of a lot of time and money.  It is what it is.  After about five minutes, I stopped thinking about the style and was fully invested in the story.

Superman and the Moral Debate – An interesting featurette that explores the themes further that are discussed in the film.  Scholars, military men, and comic writers are interviewed to hear what they have to say regarding Superman’s strict moral code.  Whether you agree with them or not, it’s an interesting debate to be had and fun to discuss whether this a realistic way of thinking.

The Elite Unbound: No Rules. No Mercy. – I loved this because I knew nothing about The Elite before this film.  Joe Kelly, the co-creator of the team, talks about each character individually, their history, and his thought process in creating them.  This really expands on the team in a lot of ways that the film does not.  Plus, it is always fun to hear the creator talk about his work.

A Sneak Peek at “Batman: The Dark Knight Returns. Part 1” – Many in the comic book industry whether they be writers, artists, or fans would say that “The Dark Knight Returns” is the most influential Batman comic ever written.  It took Batman to a darker place.  More brutal.  I know I am just one among many excited to see this book brought to life.  I am a little disappointed that they are splitting it up into two parts, but I know it will be fantastic regardless.

“What’s So Funny About Truth, Justice, and the American Way?” Digital Comic – If you are like me and have never read the comic that this film is based on, then you have the perfect opportunity to check it out here.

There is also an audio commentary with Joe Kelly and Eddie Berganza as well as a brief photo gallery from the upcoming “The Dark Knight Rises”.