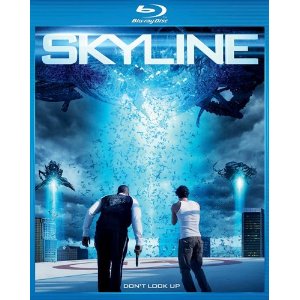 Skyline stars Donald Faison (Scrubs) and Eric Balfour (24, The Texas Chainsaw Massacre) as two friends who find themselves among the last survivors of an alien invasion. Following Alien vs. Predator: Requiem, Skyline was directed by the team of The Brothers Strause. Colin Strause’s work in visual effects reads like a who’s who of big budget CGI films; everything from Avatar to Band of Brothers to Terminator 3. It’s his extensive work in the field of CGI that has undoubtedly made it possible for him to make such breathtaking visual effects in Skyline. With a total budget of $10,000,000 (which is a tenth of The Tourist and a third of District 9) The Brothers Strause made the best of every dime for their visual effects. Unfortunately when they were cutting corners, they sacrificed on the non-CGI shots too.

As far as alien invasion movies go, Skyline is probably one of the more realistic incarnations. Our main characters don’t suddenly learn to fight like marines and no one highjacks a spaceship, but unfortunately the production team may have backed themselves into a corner with this concept. Much like the recent and much more expensive, Battle: Los Angeles, Skyline feels very small. Poorly framed camera shots and a lack of other survivors take away any sense of scale. With the exception of a few wide angle shots of the “skyline”, this movie is essentially a one room drama.

The video quality of the film on Blu-Ray shines when CGI is center stage, but suffers when earthly interior shots are on screen. The audio will rock your socks off. If you have a subwoofer and neighbors, be prepared for them to be pissed.

If you’re in the mood for a big budget alien invasion movie, you’re probably better off renting Independence Day, District 9 or War of the Worlds, but if you’ve got some extra time and would like to see how creative filmmakers can stretch their production dollar…you might want to watch Skyline.