Billy Elliot The Musical plays the Fabulous Fox Theatre from November 1-13. Performances are Tuesday-Friday at 8pm, Saturday at 2 & 8pm, Sunday at 2pm, Nov. 6 at 7:30pm and Nov. 10 at 1pm. Ticket prices start at $33 and are available online at metrotix.com or by phone at 314-534-1111. Visit the Fabulous Fox Theatre website for more information at fabulousfox.com.

Ten days ago I was lucky enough to interview Rich Hebert, who is coming to St. Louis with the nationwide tour of Billy Elliot The Musical. We had an interesting discussion which involved talk of the ongoing World Series, and the manager who led our own Cardinals to their 11th World Series Championship. Read how Rich, who plays Billy’s father, has a connection to the now retired Cardinals manager below. 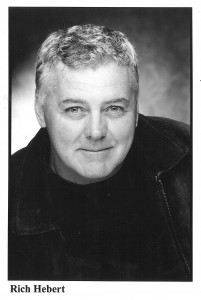 Is this your first time through St. Louis?

Wow, that’s a nice friend to have! Are you keeping up with the World Series?

I’m trying to, but we don’t have a television at the rehearsal space.  We are there from 12 to 11, so I have to settle for the highlights.

Is this your first time performing at the Fabulous Fox?

Were you a fan of the film before you took this role?

Yeah, I really love the film. I think I only saw it once in the movie theater, but I liked it a lot when I saw it.  The next time I saw it was when I was auditioning for the show, and I took a look at it again to reacquaint myself with it.

Really closely. It goes off, in so much as in there is singing and dance numbers. The ending is different, and you see older Billy at a different point.  Other than that though, it is very true to the film. We have the same director and writer who wrote the show, so he has a reason to stay close to what he had written.

Is it hard to separate your character from the actor who originally played him in the film?

Physically I’m quite a bit different from the actor in the movie. It does help that the actors in the film were a bit closer to what had gone on there. It is good to pick up as much as you can of the sensibilities. I try not to think about it too much, I went and learned as much as I could about the strikes. I come from a working class family, so I share some of the same sensibilities.

Billy Elliot is inspiring to me because, despite the cultural sensibilities, a young boy chooses dance over boxing. Not everyone takes to it right away, but eventually he wins it over. Why do you think dance, which is so athletic, has that stigma? Do you think the musical and film help improve the outlook for dance?

I think you can see it with the kids to who come to see the show.  Kids in their early teens, or even right before that, really connect with the fact that you should just try to be yourself, and go with your instincts. Any kid who might feel it is unmanly to do what feels right, it frees them up a bit. It gives them the opportunity to think for themselves.

There are dancers in this show who have spoken to me about my character being like their father in certain ways, as to how they were treated when they initially wanted to dance.  Some of their fathers came around to the idea, while in some cases they didn’t.  There is a catharsis for people like that in the show.

I grew up in an extremely working class environment. I played all the sports, basketball, football, and all of that. I tried to get in all the clubs so I could get some sort of scholarship. I tried to get every scholarship I could, so I could go to college.  One of the things I did for that was join concert choir. I would sneak into that, because I didn’t want everyone to know I was doing it.  It wasn’t something that was considered very manly.  One day I was asked to go to the regionals, because I had a good voice, but it was during a football practice.  I went to the coach, and he told me no problem, and that I could go.  We won the regionals, and we were going to go to the finals. When I went back to the coach the next day at practice, he huddled everyone around in a circle, and told me to get in the center of it. I had to stand in the center of the circle, and tell everyone what I was doing, and what I would never do again.  So, after telling me I could do it, he came down old-manish on me and busted my chops. There was a stigma about that, and it helps me understand the stigma associated with dance.  People can be closed minded and live in fear that they have.

I can’t believe someone would actually do that!

Yeah, I actually told that story at a concert in San Fransisco once, and Tony LaRussa was with the A’s at the time, and agreed to do a song with me. We did a number from Damn Yankees, called “The Game”.  We did it together, and when I introduced him, I told that story. I told the audience that was the kind of coach you didn’t want, but the man coming on stage was the kind you would want, one that understood life.

Has he seen you in the show?

Yeah, he and his wife came and saw me in San Fransisco and loved it.

Any plans for him to come see you when you come in town?

Well, I might be just missing him. He lives in the Bay Area, so after the series he will probably be going back to his family. I might miss him, but like I told him, hopefully I’ll be able to see the parade!

I think you are on the same page as everyone else is in St. Louis, it is absolutely nuts with the excitement over the series here.

RICH HEBERT (Dad) returns to the stage after 4 years of living the “civilian life” of a theater instructor at Bridgewater State University. Hebert was last seen as Commander Khashoggi in the Las Vegas production of We Will Rock You. Broadway and National tours include, the original Broadway companies of The Life, Sunset Boulevard, Les Miserables (Bay Area Critics Award), Cats, Saturday Night Fever, and Rock and Roll the First 5000 Years. He starred as Manuel in MTC’s Captains Courageous, Zoser in Elton John’s Elaborate Lives in Atlanta, and Warbucks in Papermill Playhouse’s Annie. TV credits include: Brotherhood, Law and Order SVU, NYPD Blue, The Sopranos, Deadline, Line of Fire, The Oldest Rookie, 21 Jump Street and numerous soap operas. Rich is a graduate of Boston University.

Billy Elliot The Musical plays the Fabulous Fox Theatre from November 1-13. Performances are Tuesday-Friday at 8pm, Saturday at 2 & 8pm, Sunday at 2pm, Nov. 6 at 7:30pm and Nov. 10 at 1pm. Ticket prices start at $33 and are available online at metrotix.com or by phone at 314-534-1111. Visit the Fabulous Fox Theatre website for more information at fabulousfox.com.