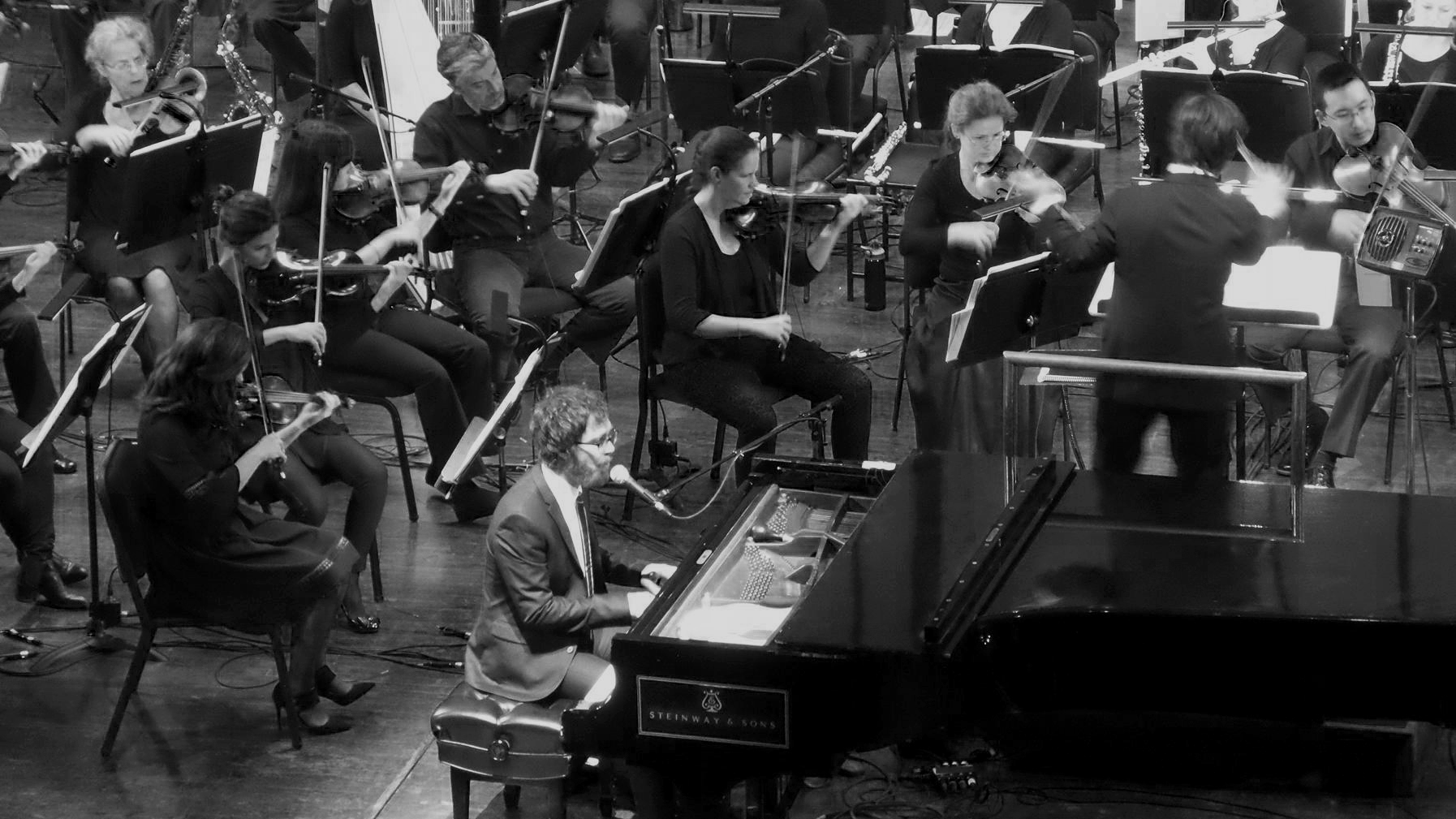 If there ever was an artist whose music was perfect to play with a symphony orchestra, Ben Folds makes the top of the list.

On Sunday evening, Folds packed the beautiful Powell Hall in St. Louis for the second night in a row. Nearly every seat of the almost 2,700 capacity auditorium was filled, with a diverse crowd of fans anxious to see the piano rock-star unleash his unique sound.

Making the occasion even more special was the fact that he was once again playing with the prestigious St. Louis Symphony Orchestra.

The singer/songwriter first played with the SLSO in November of 2011, and after much acclaim returned in April of 2014. Since his first visit to Powell, Folds has scored a concerto for the Nashville Symphony Orchestra – bringing the second and third movements to St. Louis. Folds equates the second, slower movement to a “power ballad.” Both of the movements were incredibly beautiful, and equally powerful. Having been conceived for a symphony, the pair fully showcased the talents of the orchestra – along with their maestro, Conner Gray Covington.

Opening the show was “Effington,” a song that Ben released in 2008 on his album Way to Normal. While touring through Illinois Ben spotted an exit for Effingham, mistaking the name, and wondered what the people do in such a town. The result was a catchy tune questioning whether or not the people are, “effing in their yards? Effing in their cars? Effing in the trailers in the back roads and the parking lots.” It was a perfect way to start the evening; Folds pounding away on the ivories while the orchestra beautifully played along to his silly lyrics.

The show was well-balanced, combining an equal mixture of fan-favorites with newer tracks. In addition to the concerto, Folds played “So There” and “Capable of Anything” during the first set – both on his latest album. From his first band – Ben Folds Five – he performed “Mess,” and closed out the set with “Stephen’s Last Night in Town.”  It was fantastic to see the range of Fold’s music, as well as the incredible talents of the orchestra throughout the evening.

Watching Ben perform “You Don’t Know Me” without Regina Spektor was especially entertaining, as he requested help from the audience to fill in for the high notes. This wasn’t the only example of audience participation; the singer likes to have his crowds help him out with the chorus of “Not The Same” a cappella style, which always goes over well.

Musical abilities aside, Ben Folds has always been a talented raconteur. Fans of his know that they can always count on some fun stories in-between songs. Ben regaled the audience with tales of his childhood, being told he can do anything he wants. He talked about his child’s trip to the ER, only to find out that they were overly gassy. And entertained the crowd with the meaning behind some of his older songs – like how Stephen just wouldn’t leave Nashville.

The second set kicked off with “Zak and Sara” and “Picture Window,” yet it wasn’t long before someone in the crowd yelled out, “rock this bitch!” To the uninitiated, someone blurted out the same phrase during a 2002 live recording and was forever immortalized on the album. Ever since, someone manages to yell it out at his show, and Ben accommodates. As you can imagine, improvising a song on the piano is one thing; improvising a song with a symphony orchestra of fifty to sixty musicians is whole different story. Luckily Ben knows exactly what he is doing, and within five minutes we had a brand new song – “Last Night in Sweden,” based on current events. Again, if I haven’t made it clear, Ben Folds knows how to entertain.

Before the night was over, Ben and the orchestra played “Not the Same,” “Brick,” and “One Angry Dwarf” – the latter, I might add, completely floored the audience with how much the orchestra rocked out during the song. And as if that wasn’t enough to finish off the night, Ben came back to play an encore of “The Luckiest,” a personal favorite of mine, and “Theme from Dr. Pyser.”

Seeing Ben Folds perform live, in any capacity, is the treat in its own right. But seeing him perform with an orchestra (not to mention the St. Louis Symphony Orchestra) brings the experience to a whole different level. If you have the chance to see Ben come to your city, and play with your orchestra, you better not miss it. I for one know that the next time he comes to St. Louis, I’ll be first in line to welcome him back.

Ben Folds will be performing on Feb 21 in Columbia, MO, and Feb 23 in Salina, KS with Kadhja Bonet. February 24 will be his next orchestra performance with the Omaha Symphony. For information about his upcoming tour dates visit benfolds.com.

The St. Louis Symphony has a wide array of musical offerings. Visit stlsymphony.org to see the upcoming concert schedule.