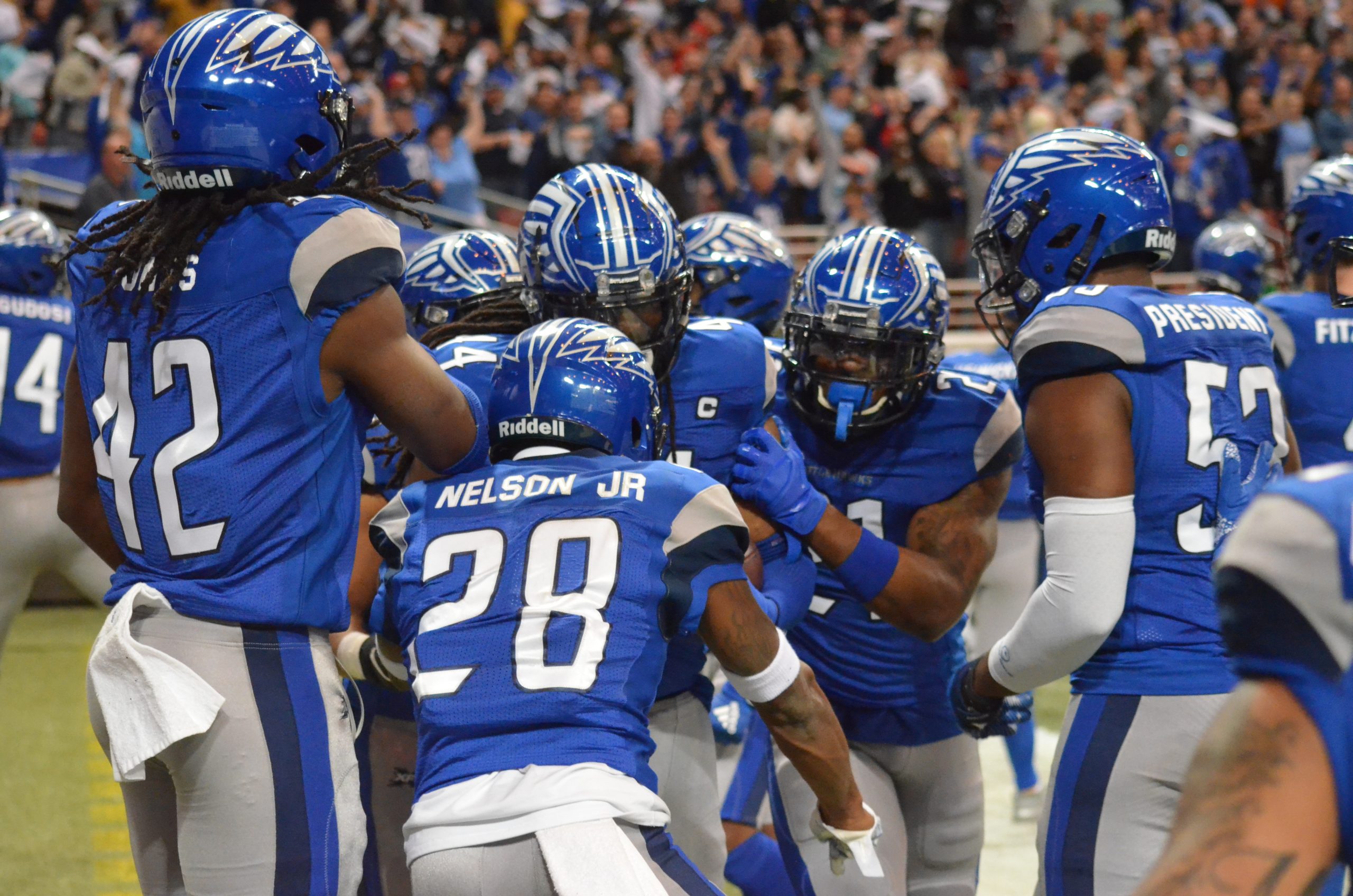 The crowd was raucous and ready for the return of football as the St. Louis BattleHawks took the field Sunday for their first-ever home game in The Dome at America’s Center. One of the XFL’s top teams didn’t disappoint.

St. Louis went on to easily win the game over the New York Guardians, 29-9, improving to 2-1 on the season.

Pre-game festivities included former Rams great Torry Holt catching a pass near midfield, much to the delight of the towel-waving crowd.

The boisterous crowd played a role early on, as the Guardians picked up a false start call at the 11:30 mark of the first quarter. New York’s offense continued to plow ahead, as quarterback Matt McGloin connected on a key third down play to keep its first drive of the game alive.

After a couple of run plays, the Guardians found themselves again looking at third and long. McGloin was sacked by defensive lineman Casey Sayles, forcing a New York punt with 7:56 to go in the first quarter.

St. Louis Battlehawks head coach Hayes said the sellout crowd – the largest in XFL history at 29,554 – played a part in his team’s success.

“I want to express my thanks and the team’s thanks to all who came out,” Hayes said after the game. “That really ignited our players and got us excited. It really made it difficult for the other team.”

With 4:56 left to go in the quarter, it looked like St. Louis would be punting. However, a New York defender ran over punter Marquette King, resulting in a St. Louis first down on their own 38-yard line.

The BattleHawks were helped out on another third down play when New York was called for pass interference with 3:05 to go in the first quarter. On third down and 16, Alonzo Russel caught a 14-yard pass, giving the BattleHawks fourth and two at midfield. The crowd booed a bit as St. Louis elected to punt.

New York took over on their own 35-yard line with 1:14 to go in the first quarter. To open play in the second quarter, New York’s offense looked to come alive a bit as running back Darius Victor had a nice 11-yard run, bringing the ball down to the St. Louis 38-yard line.

The Guardians were facing a third and seven with 13 minutes left in the half. The St. Louis crowd came alive, as did the defense, forcing a fourth down. New York attempted a 53-yard field goal, which was successful, bringing the score to 6-3 in favor of St. Louis.

On the ensuing kickoff, Keith Mumphery took the kick left and then tossed it to Joe Powell for the reverse. Powell took the ball all the way to the end zone for a touchdown. It was the first kickoff return for a TD in XFL history. Powell talks about the TD in the video below:

After forcing a New York punt with 2:06 left, Carlton Agudosi blocked the kick, which was picked up by Shaq Jones, who took it down to the 17-yard line. With 1:11 left, Jones plunged into the end zone from the 1-yard line to give St. Louis a 21-3 lead. The two-point conversion was good as quarterback Jordan Ta’amu tossed the ball to De’Mornay Pierson-El, who then tossed it into the end zone to Alonzo Russell, bringing the score to 23-3 St. Louis.

As New York was driving down the field looking for a last-minute score, McGloin was picked off by Kenny Robinson. St. Louis took over on their own 17-yard line with :22 seconds left in the first half. The BattleHawks were content to go into halftime up 20 points, 23-3.

To open the second half, Russolino connected on a 58-yard field goal to extend the St. Louis lead to 26-3 with 9:57 to go in the third quarter.

At the 3:35 mark of the third quarter, New York faced a fourth and one from their 15-yard line and the St. Louis defense held, giving the ball back to the Battlehawks.

In the fourth quarter, the Guardians put together a drive that went down to the 2-yard line and on a fourth down play, the St. Louis defense held its ground again, forcing a turnover with 12:27 to play in the game.

New York added a TD at the 6:13 mark of the fourth quarter on an eight-yard pass from third-string QB Louis Perez to Austin Duke. The three-point conversion attempt failed, bringing the score to 26-9 in favor of St. Louis.

Ta’amu expressed his gratitude for the crowd showing up in full force to support the team. It was the first pro football game in St. Louis since the Rams hosted Tampa Bay on Dec. 17, 2015.

“They met my expectations,” he said. “When we were getting off the buses, I felt the energy. It’s everything I imagined.”

Jones rushed for 95 yards on 15 carries and Michael added 44 yards on 13 carries.

Hayes said his team played well in all facets of the game.

“It was a three-phase game today,” Hayes said. “We really blew the roof off this building.”

The BattleHawks play host to the Seattle Dragons this coming Saturday. Game time is at 4 p.m.

All Photos by Corey Saathoff.