Wins are another fun puzzle at times. USUALLY, the win goes to the pitcher who last pitched when the winning team scored the winning run. BUT, if the starting pitcher doesn’t go at least five innings, then it becomes a mystery grab bag.

– Say Shelby went the six innings, gave up two earned runs, and the Cardinals won the game 6-2. If the Cardinals scored the game-winning third run while Shelby was still pitching, Shelby would get the win.

– BUT…say Shelby DOESN’T go six, or even five, innings. Say he throws a lot of pitches and he leaves the game in the fourth inning, BUT the Cardinals are winning. Then the win goes to…? 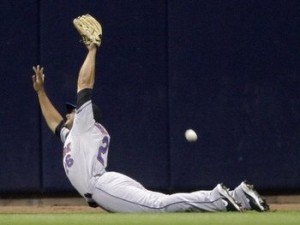 At that point, it’s up to the discretion of the official scorekeeper to determine which pitcher was most effective in relief in preserving the win. There’s no formula to determine it. I think it’s more magic.

– Pitching’s hard. I mean, it’s really hard. It used to be even more difficult. In baseball’s nascent days, the batter was allowed to call whether he wanted a high or low pitch, and the pitcher would have to comply.

– The distance from home plate to the mound is officially 60 feet, 6 inches. According to folklore, it was intended to be 60 feet, 0 inches, but due to someone misreading the hand-written instructions, the 0 became 6 inches. Just like…yeah.

– If you watch baseball long enough, eventually you’ll hear a left-handed pitcher called a southpaw. Curious why this is? Well, MLB actually has guidelines for how the stadiums are to be laid out. According to rule 1.04, they recommend that the line going from home plate to second base/center field point east/northeast. This is intended to minimize the effects of the sun on the batter so he won’t be facing into the sun when batting. As you can see here, not every stadium complies with this. In the stadiums that do comply with this suggestion, though, a left-handed pitcher’s dominant arm would be facing south; hence the term southpaw.

Alright, that’s enough for tonight. More…whenever I feel like it. As always, feedback is welcome.