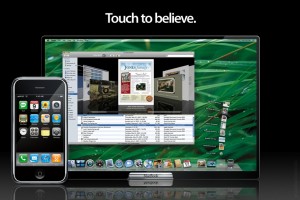 The buzz on the internet for the past couple weeks has been what you would expect if word leaked about the second coming of Christ. This buzz is just generated over a simple gadget by Apple. Rumors have been going around lately that Apple is looking to launch a new tablet into the market called iSlate. The hysteria around the rumors have reached levels so highs that every webcomic, news aggregator site, or blog seems to have commented on it.

I first noticed the rumors when a user on Reddit posted an image with the title, “100% confirmed photo of an Apple tablet computer! [pic]”. The image just turned out to be an old Apple Messagepad running on Newton. Many people took the bait, hook line and sinker.

However, other photos leaked on the web look much more credible, and look very much like the current style of Apple electronics, with polished silver backing and glossy black edges, much like an oversized iPod Touch. The rumors have said that the device will have built in Wi-Fi (which at this point you wouldn’t have to be psychic to know a portable device contains wi-fi), and may have the option to connect to a mobile network. Allowing users on the go to have a powerful (or semi-powerful) computer to download books, movies, and music on the go would be a truly revolutionary device. Apple has already tried to change the game with their abnormally thin MacBook Air, but could a tablet fit much better on today’s market?

Jobs seems pretty confident about this year’s slate of products saying, “The new products we are planning to release this year are very strong, starting this week with a major new product that we’re really excited about.”

The company has experienced a Renaissance in the past 10 years staring with their candy colored iMacs, and then their revolutionary iPod which easily controls the portable music player market. Their line of MacBooks continues to sell well, and their smartphone, the iPhone, continues to gain ground on other smartphone platforms. Why wouldn’t they move into a market that is still new? If anything this company has a knack for bringing items into the mainstream.

The announcement is expected to be made tomorrow in San Fransisco by Apple CEO Steve Jobs. Once he makes the announcement (if it does end up being about a tablet), expect geeks all over the world to immediately high five, and then quickly rush to their facebooks, blogs, and message boards talking about what looks wrong with the device.