Apple stays strong, Android is stronger… smartphones for everyone!

Gartner released their quarterly report today comparing the smartphone market in the first quarter of 2010 with 2011. The latest data puts the numbers at an overall sales increase of 84.88% since this time last year with over 100 million smartphones sold so far in 2011.

Smartphone sales have undoubtedly ramped up in recent years. Some say it started in 1999 with Blackberry, some say it was the T-Mobile Sidekick in 2002. But the smartphone industry didn’t explode until Apple gave birth to the iPhone in 2007. A year later, Google released their first phone featuring the Android OS. Both Apple’s iOS and Google’s Android have been quite successful at stealing market share from their competitors. The iPhone is now available in 90 countries from 186 carriers, while Android is available from 36 manufacturers on 310 devices in 112 countries across 215 carriers. 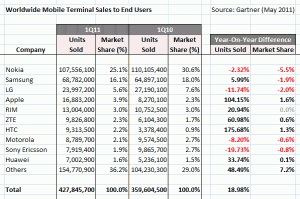 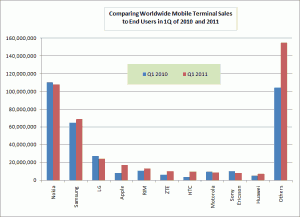 Mobile terminal sales (both dumb and smart phones) still put Nokia on top. They have been a worldwide leader in the mobile industry pretty much since the beginning of time itself. Although they sold 2.32% less in this quarter compared to a year ago, over 107.6 million devices in a single 3 month period is nothing to shrug off. Recently, a lot of factors have come into play regarding their recent dip: ditching their beloved Symbian OS, transitioning to Windows Phone 7 (they are currently focusing development to a new platform so no actual product to sell at the moment), and the rise of both iOS and Android. The effect really shows itself when you learn that current numbers of total device sales have sunk to a level Nokia has not seen since 1997 (before 3G even existed!).

Yet Nokia, who has openly denounced Android, is faring much better than some other handset makers who are all about the little-green-monster-that-could. LG, Motorola (surprisingly), and Sony-Ericsson all have a worse year-on-year sales dip than the Finnish mobile giant. All three of those manufacturers have been relying heavily on Android as of late. Given the skyrocketing popularity of Google’s mobile OS, this means users are ditching their dumbphones and going elsewhere for their smartphone fix. The proof is in Gartner’s data: Apple has more than doubled their quarterly sales (up 104.15%) and HTC has gone even further by selling almost 6 million more devices than last year for an impressive 175.68% gain year-over-year!

Both Apple and HTC are the only two companies whose shares have risen this year. HTC has much to celebrate other than being the biggest winner in last quarter’s sales. They can also lay claim to being the current #2 smartphone manufacturer in the United States (behind Apple of course), having now overtaken Research in Motion. HTC also overtook Nokia in worldwide market value last month. Sitting behind Apple and Samsung in market value is not as bad as you think: HTC earned the position as the world’s third most valuable company in mobile without selling TVs or computers. Smartphones are their sole business product. 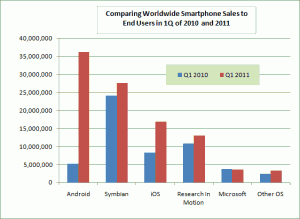 The sales numbers divided amongst mobile operating systems paints a different picture. Symbian’s smartphone sales this quarter show the biggest decrease since last year at a 16.8% loss. The first quarter of 2011 marks the first time Android can claim to be the #1 selling smartphone OS worldwide, overtaking Nokia’s Symbian OS. Apple’s iPhone more than doubled its overall worldwide sales with a 101.96% increase over last year’s quarterly results (it’s not specified but I assume these are smartphone results, so iPad and iPod Touch would be excluded in the iOS totals). This puts iOS alongside Android OS as one of only two mobile operating systems that stole market share from their competition.

Android’s story is even greater though. Android almost sextupled their sales (593.91% increase!) compared to the same quarter in 2010. Last year’s numbers reveal that Android snatched away an extra 26.4% of all smartphone sales in Q1 2011. This put Android’s 36.3 million in smartphone sales at more than twice the amount of Apple’s 16.9 million. To be fair, Apple just brought out the Verizon iPhone in February, so it was actually only selling three devices for about half of last quarter: iPhone 3GS, AT&T iPhone 4, and the VZW iP4. Google was probably somewhere near the 300-device marker at that time.

I, for one, welcome our new smartphone overlords.