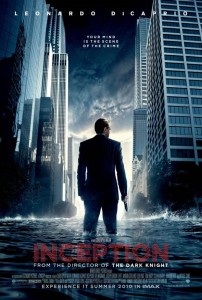 Inception, the latest from Christopher Nolan, is nothing short of phenomenal and is a prime example of why we go to the movies; to have an experience almost none of us could ever even imagine.

I am not going to even try to explain the plot as it is both complex and better experienced as virgin as possible. But in short it follows a team of contracted thieves, led by Cobb, who steal information from people’s minds by sedating them and creating a dream world which allows them to extract their target mission. When the team is recruited to plant an idea in a mark’s mind, through Inception, they will have the greatest challenge they have faced yet.

The film is beautiful and innovative in both its visual and storytelling devices and while it may seem too expository at times it is need because we have nothing to really compare this too. I am almost always getting upset with telling instead of showing, but the telling is always necessary and Nolan does the showing, brilliantly, and leaves plenty to the viewer’s imagination. But what Nolan does best is inspire the imagination and them proceeds to blow a hole out the back of it.

While the plot is complex it is more than followable but it will demand your attention. You will catch on to little things before they are revealed and there will be reveals you won’t see coming, and in the end a quick conversation with some friends will help you unravel anyone’s issues/confusion.

Any issue I have with the film I don’t think will last the second time around, and there will definitely be at least one more visit to this well, and while things are a bit slow after the opening scene we have to go through the paces so that we can experience the film at its full worth.  In fact, I would have liked to have seen a lot more in these “training” scenes as the more we get in the dream world the better.

But really, just go get in line now, I can’t heap enough praise and this is a film that is only going to get better as we get to digest it more in our minds and on our return visits to the theater and the subsequent Blu-ray.  It is just so damn nice to see something original, engaging, and keeping you on your toes with what is going to happen next as things unfold.  The movie compels from start to finish and Hans Zimmer’s score does a great job at keeping us drawn in as it rarely stops, which I loved.  The sound design is also superb and the visual effects are amazing as they blend seamlessly into the action.

The acting in the film is also top notch with DiCaprio leading the way as the complex and dark past filled Cobb.  Joseph Gordon-Levitt continues to shoot his star higher into the sky and he is going to be a force to be reckoned with to the general public sooner rather than later.  Tom Hardy also does a rousing job announcing himself to the mainstream as Eames a wiseass forger on Cobb’s team. Marion Cotillard is creepy and unsettling as Mal, Cobb’s wife that holds him deep in the darkness. Ellen Page doesn’t get a whole lot to do but is good nonetheless in her role; though her character’s bond to Cobb is the biggest stretch of the picture. Cillian Murphy is diverse as his character is taken down the rabbit hole and he has to wear a lot of hats as they go deeper and deeper into his character’s sub conscious. Ken Watanabe also shines as always in his role and like Page I wish he had a bit more to do.  The cast is great all around and they help bring this great world to life.

In the end, Inception is right with Toy Story competing for the best film of the year and will go toe to toe with most everything released this year.  I can’t wait till Nolan is done with Batman so he can continue to pump out original material like this that reminds us why we go to the movies.  Beautiful to look at, fun to watch and figure out and engaging from start to finish, Inception is a great film experience that is not to be missed.