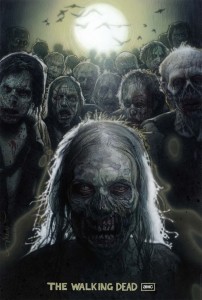 I know, I know!  “It’s been over a week since the finale and three weeks since your last review; what the hell!”  Well I will just blame Thanksgiving, deal?  Any who, the first season has ended for the Walking Dead and while I enjoyed it I hope that the second season allows them to flesh things out and learn from the mistakes.

I won’t bother recapping blow for blow two episodes here, but to be quite honest, not a lot happened in the last two episodes.  The group gathered themselves and buried the dead after the attack on the camp and made there way to the CDC, a facility that should be working on the cure.  The 5th episode, Wildfire, was about a lot of the characters coming to terms with their current situation and going through the much needed catharsis; if possible that is.  The highlights of the episode were Andrea’s final words with her zombie resurrected sister, Amy, and Jim’s selflessness to just be left behind to turn after being bit in the attack.  Both of these moments were only topped by the fantastic and gruesome moment when Carol pummels Ed skull with a pick axe to make sure he never rises again after years of abuse and pain; great stuff.  Shane’s losing it as well and I was a tad disappointed this didn’t come to some sort of closure as it could have provided for a solid emotional finale for the season.  Instead Shane will be around as a potential loose cannon that I can’t imagine will last all that long.  This episode also had a great scene with Jenner who is our only CDC resident and this served as a foreshadowing/introduction for the main character of the season finale.

When the survivors get to the CDC in the finale they can all finally breathe a sigh of relief.  Beds, food, hot showers, booze, they got it all there and Jenner is glad to share.  Jenner has no qualms on sharing because he knows that this place doesn’t have all that much time left.  The building is about to run out of power and in the case of such an event the building will basically self destruct to destroy all the terrible things inside the government research facility.  This leads to an interesting test of hope and mortality for the survivors as Jenner locks them in and tries to convince them that this is the easy and most desirable way to die left in the world.  The survivors haven’t given up yet though and even though Jenner lets them know that this is a pandemic they still long for a chance to survive. This serves as at least a positive, but possibly foolhardy, finale to the season but I can’t say I didn’t feel a bit disappointed.

The premiere was so fantastic that the series will forever be trying to live up to that episode for its entire series run I feel.  We need more zombies, plain and simple.  I am not asking to cut all the character stuff but there were just too many main characters I feel.  The cast as it stood this season was too large for a lot of the emotional moments in the latter half to resonate like they were meant to.  The above mentioned moments worked quite well, but even in the case of Jim that was only do to some great writing/acting in the said moment.  I didn’t care that Jacqui wanted to stay behind and die in the fireball with Jenner.  The only feelings I had when Andrea and Dale were bickering over Andrea trying to stay behind in the fireball was, “Dale, get the hell out of there!”  This isn’t a knock on Andrea, but I felt like her character had a full and reasonable arc if she died right there.  Dale on the other hand is one of the few characters that I really enjoy and want to know more about going forward.  Shane is a bit too one dimensional of a character and shouldn’t be, Mrs. Grimes has failed to grab my interest, Glenn and Daryl are both interesting/engaging, and Rick is a pretty awesome hero for our show (minus his almost too heavy handed selflessness).  Everyone else I could really careless about and the sooner they are eaten the better as it stands.  I understand the six episode season really limited the creative crew from being able to flesh out all of these characters and I really do hope that they use their full 13 episodes affectively next season.

-Really, she has a grenade in her purse?

-“I’m grateful,” Rick says. “The day will come when you won’t be,” Jenner counters.  Best line of the series right there and one that just kills pretty much any and all hope of this thing getting better.

-They did do a fairly good job of explaining the zombies in a way that seemed believable and not too ridiculous, but the finest part of that scene was bring it full circle to Jenner and his plight.

-Jenner was a great character by the way and props to Noah Emmerich for coming on and killing it in his guest spot.

-It is also a little frustrating that neither Morgan nor Merle showed up again after they disappeared here but it will be interesting to see how those stories play out.  It would be rather appropriate if we never see either of them ever again; even better if we see them as zombies.

That’s all I got for now.  A solid couple of episodes but I feel like the series never got close to elevating itself to the level that is capable of, post-premiere.  Though budget, lack of episodes, and uncertainty of a future probably catered to these issue and they will hopefully be alleviated in future seasons.  Being the highest rated cable program is bound to get them some more cash and hopefully some big time behind the scenes talent will come in to help in the season to come.  Either way, a nice start to a promising series that I hope only gets better and better as the years role on.  Until next season…