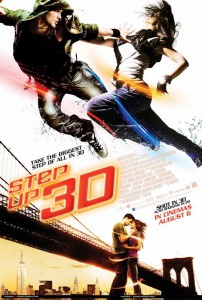 Step Up 3D is a clichéd narrative nightmare but when its focus is dance the film works pretty damn well.  The film, oddly enough, is also a saving grace for the 3D medium after a series of mediocre post conversions that have enraged many avid filmgoers.

The story for this installment of Step Up seems to be somewhat of a continuation from the second film (I never saw Step Up II: The Streets).  Moose is a carry over from the second film, starting off his first year in college, and he is hoping to leave his dancing life behind for an engineering degree.  But those plans are quickly tempted when he accidentally gets in a dance off and meets Luke.  Luke, an inspiring filmmaker/dancer, owns a warehouse loft/club that houses a team of dancers, the Pirates, which mix multiple styles to form a unique identify to take on opposing crews.  Luke recruits Moose to join the team for the World Jam Competition (?) and before you know it Moose’s life is all about dance again.  Enter Natalie, a young and sexy dancer that catches Luke’s eye in his warehouses dance club and she too is recruited to join the team and serves as a potential love interest for the filmmaker.  Looming over all of this is a debt on the mortgage for “The Vault” (Luke’s Club), which is being threatened to be bought out by the Samurai (a rival crew).

And that is about as complex as the plot gets.  Given that paragraph you can probably formulate pretty easily where things go from there.  Will Moose have problems with his school life?  Will there be a falling out among the crew?  Will they loose the club and have no where to go?  Will someone betray the group?  I think you could infer all of these questions, and their answers, fairly easily.

To be honest, the film wasn’t so bad for the first half or so.  Sure it was clichéd and predictable but it wasn’t cringe inducing.  It’s as soon as a romance seems to ignite between two of our characters things start to get a bit ridiculous.  Nobody can really act and the awful script does not help matters either.  The dialogue that these characters sputter out is just laughable and the film quickly enters a so bad its good level of entertainment.  But I wasn’t expecting a lot out of the story side of things and I was right not to get my hopes up.  What I was intrigued with about the film was if the dancing scenes would be entertaining and how the 3D would play; having been filmed in native 3D.  And to this end the film works really well.

For anyone interested in this film solely for the dancing should have no fear getting in line as the dancing sequence are fantastic.  The dancing is so good compared to the rest of the film that I can’t fathom why the filmmakers even bothered with a story as long as they do without a dance sequence in the third act of the film.  The three dance-offs are a super entertaining and dance fans will no doubt walkway satisfied.

And when it comes to the 3D, I would go as far as saying that this film will re-instill hope in the potential of 3D at the movies.  This is the first native 3D effort that shows off the capabilities of the medium in live action without a bunch of special effects or in an animated form.  Sure Avatar had plenty of live action moments in 3D but all of the action was pretty much handled in a computer or filmed on a motion capture stage.  What this film does is show how sharp and clear true 3D is when you film it in camera and that it can more than keep up with people moving as fast as humanly possible.  People are flying around, spinning and doing insanely fast dance moves and the 3D effect works great with excellent picture clarity.  The movie made me wish Edgar Wright had been able to see this film before making Scott Pilgrim because all I could think was how even more incredible Scott Pilgrim could have looked filmed in native 3D.  Director Jon Chu uses the 3D perfectly with the dance sequences and the film has me immediately anticipating the next non-cg effects heavy film shot in native 3D. Anyone sick of post-conversion 3D needs to check out this film to see what the medium is truly capable of as it adds an extra level to the beautiful and exhilarating dance sequences that are choreographed brilliantly.

In the end, Step Up 3D is both a resounding success and a dismal failure.  As a narrative film it does nothing interesting or original and become laughable about half way through the film.  On the other hand, the 3D is done really well and it gives an extra level of excitement to the already stellar dance numbers.  So if you want to see a technical achievement in 3D (minus an awful Slurpee gimmick) and dance choreography then you will be more that satisfied with Step Up 3D.  Expect anything more and you will be extremely disappointed.