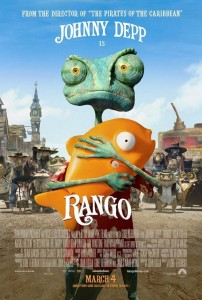 Rango’s story might be a familiar hodgepodge of classic film’s and such, but the title character and the amount of weirdness the film throws at us elevates it to accompany the incredible ILM animation.

To call the film is actually almost an understatement. The film constantly borderlines on being inappropriate for children, has some rather graphic imagery, and it is nearly photo realistically produced by the pros at Industrial Light and Magic.  Please, ILM, make more animated films; beautiful stuff.  I didn’t even get to see the film in its full digital glory, stuck watching on film, and it was still incredible to look at. But enough gushing on how pretty and weird it is.

The film follows Rango, a lizard, who has been living his life acting out scenes with his inanimate surroundings of his tank/cage.  When he is bummed out the back of his owners car with nothing but his wind up orange fish in the middle of the desert he is sent along to discover Dirt.  Dirt is a more or less waterless, western, town that is losing its town’s people by the day as their water supply has all but dried out.  When Rango shows up he puts his acting talents to work and conjures up a tough guy persona for the townsfolk and soon finds himself as the leader on the hunt for the town’s water.

Gore Verbinski enlists Johnny Depp and a few others of his Pirates cohorts to populate the town of Dirt and the results are really quite bizarre.  From a snake that can shoot bullets from its rattler, moles that can fly bats in combat, characters casually acknowledging giant underground monsters, or armadillos that can overcome a tire through their abdomen; you will find a lot of crazy ideas here.  And it is all for the better if you ask me.  How many films out there throw references from Apocalypse Now, Chinatown, Leone “Spaghetti Westerns”, Fear and Loathing in Las Vegas, and Raising Arizona; just to name a few.  Speaking of Raising Arizona, the film feels like it could have been made by the Coen Brothers and I imagine if they every made an animated western revolving around a lizard it would look a lot like this.

The action in the film is quite impressive as well with the aforementioned bat riding scene being an incredible set piece that is worth the price of admission alone.  Humor, action, and suspense all perfectly rolled up together to create a memorable and lengthy action piece in the middle of the film.

There is only one misstep in my book, and it is a giant one in that it killed the tone and pacing of the film.  The film’s third act opens up with an odd and overly long encounter with the Spirit of the West that is clearly supposed to be The Man with No Name from the Leone films.  They recruit Timothy Olyphant, who is great, to voice the rugged legend but the scene meanders and serves little to no purpose.  To make it even further irrelevant, they had even already establish another sage like character, that is around directly before and after this odd dream!, that could have easily given Rango the same advice with the same impact.  The scene really took me out of the film and I don’t know if I ever fully got back.  I am sure it will play better on subsequent viewings, the Blu-ray is going to be glorious, knowing that it is coming, but it is very disappointing and odd to see Verbinski put two long and pointless dream sequences in his last two films; learn from your mistakes.

If there is any other complaint to make it is that the film is somehow underwhelming and unoriginal plot wise.  A Bug’s Life comes to mind on more than one occasion during the film and that isn’t the only time it seems to lift maybe more than homage. There are few surprises to be had here which is hard to believe given all the visual and character creativity on display in the film.  But like I mentioned in the opener, the creativity and weirdness Verbinski throws at us makes up for this shortcoming.

Johnny Depp is a joy in the film as he creates a unique and fully formed character and Rango that feels lived in.  You have surely seen in some of the commercials for the film that he acted out the film on a simple set to give the character a full body reference and it clearly paid off in the creation of the character.  Rango is in nearly every frame of the film, and Depp is the clear star here, but there are a number of other voice talents that help elevate the film.  Bill Nighy is great as Rattlesnake Jake and I really do wish we got more of him, just nasty.  Ray Winstone, Ned Beatty, and Alfred Molina are also quite fine in their work as well with Isla Fisher and Abigail Breslin doing the same.  Stephen Root is the other standout here though in a couple of roles that sticks with you besides Rango.

In the end, Rango is an entertaining and bizarre adventure that is hard to not have fun with.  The animation by ILM is impeccable and might be the prettiest animated film to date.  While Verbinski’s film is not quite at that Pixar level, it is an interesting experiment for the medium that can be enjoyed by kid and adult.  But be prepared, the film is out there, and is easily one of the weirdest things to be released from a major studio in recent memory.  I just hope a second viewing washes away the bad taste the Spirit of the West scene left in my mouth and I can fully enjoy the film’s third act.  Oh, and I would have loved to have seen this in 3D, but not a deal breaker by any means.