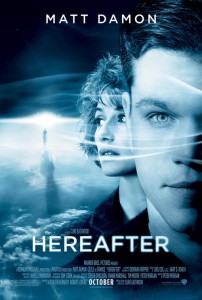 Clint Eastwood’s latest bests his last couple efforts but for every thing I like about Hereafter there is almost always something that really grates me the wrong way.

The film follows three thread lines of different people that have had a recent connection with death and/or the “hereafter.”  One is a French reporter who has a near death experience in a tsunami, a pair of twins in England that run into family tragedy, and an ex-psychic in San Francisco who is trying to reconnect with the real world.  The reporter is trying to understand what she experienced, the twins are trying to connect, and the psychic is attempting to leave the world of the “hereafter” behind. All these threads serve as fairly interesting character studies but they never blend together all that well.  The characters are obviously disjointed and unconnected to one another and you are left to watch them move parallel through life.

And that is where some of the problems begin to creep in, the lack of connection between these characters.  Sure we have seen many stories like this before, Traffic, Babel, Syriana, but what this film lacks that those have is any sort of interconnectivity between the characters.  It quickly feels like we are watching three separate films connected by a similar theme and it just feels awkward as we jump in-between these stories.  The pacing of the film will also certainly cause distress to many as well and while it didn’t bother me all that much there was plenty of room to trim the fat here.  The film sticks with one story for long stretches at a time and just when you settle in we are whisked away to another story and it never flows well.  Each of the stories stands well alone on their own but the script needed some polish to make them work together.

Though I will say, I really like the way the film approaches the subject of the afterlife without being religious in any way shape or form.  The film dissects the idea of what the afterlife means to people and how it can change them as they look for answers within and beyond their physical lives.  The film doesn’t try to explain death or scare you with it, the “hereafter” is used as a catalyst for these character studies and it works quite well for Matt Damon (psychic) and Cécile De France’s (reporter) plot lines.  Damon’s romantic plot line plays out perfectly and he and Bryce Dallas Howard have some wonderful chemistry together.  The film’s opening scene is also kind of incredible and while the effects are a tad weak in a few places it is more than made up for in the thrilling intensity of the scene; which took my breath away.  Eastwood’s visual eye is also on display here with a couple of really clever shots and his minimalist lighting scheme works well for this material.

But like I said in my opening, for everything I liked there was something pulling me out of the picture.  I am sick and tired of Eastwood’s films always being in some disheveled home and we get more of that here; the French plot line allows for a break from the bleak at least here.  Eastwood’s score also does not work for the picture and on multiple occasions I found myself cringing at it.  I touched on the pacing and lack of connectivity that causes some issues but the script really could have been spiced up as well.  The dialogue comes across as quite simple and bland at times and the worst of it is unfortunately stuck with the film’s worst actors.  Frankie and George McLaren are horrendous in this film.  Playing the twins the two child actors are just impossible to watch and are unbelievable from basically start to finish.  Their plotline was the weakest and most familiar and they did it no favors by making it almost unwatchable every time they open their mouths or try to emote anything.  I don’t mean to beat them down but they really are horrible and spoil a movie that could have been something more if this plot line was in better hands.  The film’s final couple scenes don’t feel properly earned either but to go into that would be far to spoilery.

The actors beyond the twins are thankfully fairly sharp with Cécile De France leading the way.  As a fiery reporter putting her talents towards figuring out her experience, De France, is quick and captivating as she has to challenge a lot of skepticism.  Damon is solid here as well, bringing some much needed levity to the film, but his best work here is with Bryce Dallas Howard.  The two bounce off each other with ease while capturing the awkwardness of their situation and their last scene together is one of the highlights of the film.

In the end, Hereafter is quite the mixed bag.  Eastwood excels in some areas while completely missing the mark in others, the script has some good ideas but is full of weak dialogue and poor transitions, and the acting ranges from pretty great to atrocious.  I will say that I liked more than I didn’t and the opening scene is almost worth the price of admission alone.  If you are a fan of musings on the after-life and/or its effect on the living then I think there is plenty to enjoy here but the technical short comings of the film keep it from being anything really special.

Hereafter is a C+/B-