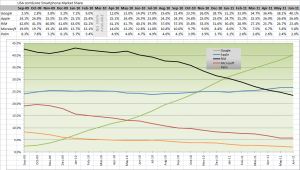 Google’s Android operating system scored the only gains from the previous month. Essentially they were the only operating system that managed to steal subscribers from the competition. Both iOS and WP7 maintained the exact same market share percentage. There are new smartphone buyers every second, but neither company could outpace Android in the month of June. Unfortunately for RIM and HP, they also stayed consistent… in losing customers. Using the data from the previous four months, my calculations put Blackberry at around 16% market share by Christmas (when Android will be nearing the big 5-0 percentage) and webOS completely disappearing before 2012.

What can we interpret for the future? When will Android peak? After hitting it’s highest market share ever last month, has iOS maxed out? Can Microsoft keep interest until Mango arrives? Is RIM somehow turning around their losing streak or are their customers waiting to jump ship for the next wave of superphones? What the hell is going on with webOS?

With so many great phones on the horizon for each company (well, maybe except webOS) it’ll make for an even more interesting Q4 2011.