American Idol Season 9 kicked off last night with auditions in Boston. Watch the video recap below:

Here is the show’s schedule from americanidol.com — 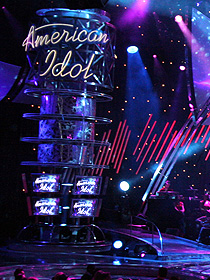 “The lucky auditioners who get the judges’ approval then move on to the “Hollywood Round” where contestants vie for a semifinalist position during the next phase of the auditions. Once in Hollywood, Ellen DeGeneres joins Simon, Randy and Kara as they continue to winnow down the competitors to a select group of performers who will get to sing their hearts out each week in front of a studio audience and television viewers.

It will then be up to America to decide who moves forward in the competition. The first performance show featuring the Top 12 female semifinalists will air Tuesday, Feb. 23 8/7c. The following night, Wednesday, Feb. 24 8/7c, the Top 12 male semifinalists will perform. The results show revealing America’s first vote of the season will air Thursday, Feb. 25 8/7c, when the two male and two female contestants with the fewest votes will be sent home.

The competition heats up when the finalists take the stage LIVE and for the first time together on Tuesday, March 16 8/7c. One contestant’s journey will end when America’s vote is revealed Wednesday, March 17 9/8c.”