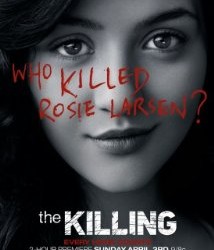 This week’s episode, “Undertow”, gets the roller-coaster ride of The Killing going back in the upward motion yet again.

The episode begins with Linden and Holder failing in their attempt to get a warrant for the arrest of Bennett Amed. Next, we get Mayor Adams destroying the allegations made by the Richmond campaign last week. Bennett’s wife, Amber, wrote down Muhammed’s phone number and gave it to the police. Bennett attempts to return to school, where he is immediately ousted by his co-workers and his students.  As they walked out of class, you see the students have put the word “Killer” on the marker board behind his desk.

The detectives chase down Muhammed and interrogate him about his whereabouts on the night of Rosie’s murder. Upon investigation, it is learned that Muhammed was actually helping another missing girl escape the country to get away from the things that happen to young girls of the Muslim religion, with Bennett’s help.

Earlier, at the beginning of the episode, Mitch Larsen apologized to Detective Linden and asked her when they were going to arrest the teacher.  Linden assured her that it was happening that night, and that was the night the warrant failed to go through. The next day, upon returning the books that her sister found to school, Mitch saw Bennett entering the school. When she sees Detective Linden later,  she questions her about this occurrence. Mitch then proceeded to harass Stan about letting Bennett go.

Muhammed takes the police to the place where they took the girl, Aisha. Stan and Belko remove Bennett from the back of one of their work vans and beat him wholeheartedly. The door opens with Aisha inside and Linden receives a call that Bennett has never returned home from school and then the episode ends with Stan standing over a motionless Bennett Amed.

So, like I said earlier, the roller-coaster is again going in the upward motion. This show is still very intriguing and I hope they can keep it at the level where this episode was for the remainder of the season. I’ve been waiting for something to happen that would take Bennett out of the suspect’s picture, because I just feel that the show got kind of boring once they put him as the leading suspect. All the evidence they had against Bennett was completely thrown out the window when they found Muhammed and Aisha. I love how with four episodes left they leave you still not knowing who the killer is.

I personally think that the steam that “The Killing” seemed to lose a few weeks ago has finally come back and I am once again looking forward to next week’s episode. I’m hoping that they finally get some more evidence that will help with their case and I need to know who is Adela and what did they have to do, if anything, with the death of Rosie.