‘Alvin and the Chipmunks: The Squeakquel’ Trailer 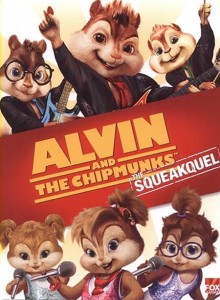 They’re back! If you didn’t get enough of dancing and singing chipmunks in the first movie, prepare for more.The whole gang (plus a few more additions) will be back this Christmas. I wouldn’t expect a masterpiece, but a real good film for children. I remember loving The Chipmunks when I was a kid, and their Christmas albums are still great to listen to.

The lovable singing-and-dancing trio of famous marmots continues their big-screen hijinks with this follow-up to the 20th Century Fox smash-hit live-action/CG family comedy, this time incorporating a female version of the group entitled the Chipettes. Dr. Dolittle’s Betty Thomas helms with Justin Long,… Matthew Gray Gubler, and Jesse McCartney returning as the voices of Alvin, Simon, and Theodore. ~ Jeremy Wheeler, All Movie Guide