Alvin and the Chipmunks: The Squeakquel 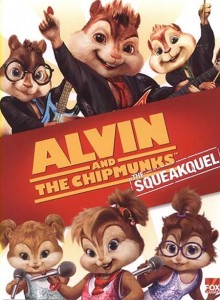 2007’s Alvin in the Chipmunks had just broad enough of an appeal to endear itself to a large audience, which brought its box office total to a respectable $361 million dollars worldwide. Not too shabby. The animated chipmunks were their biggest since their heyday in the 60s. Does their “Squeakquel” continue a trend of the Chipmunk’s rise to fame?

The Squeakquel starts with everyone’s favorite trio of chipmunks, Alvin, Simon and Theodore, doing a benefit concert in Paris. Through a series of mishaps Dave is injured, and the boys must go back without him and live with his shy and somewhat socially disabled cousin, Toby (Zachary Levi). The boys are sent to the local high school, run by rabid fan and principal, Dr. Rubin (Wendie Malick). With the musical program in trouble Dr. Rubin appeals to the Chipmunks to help the school win a $25,000 competition to keep the school funded properly. Along the way they must deal with Ian Hawke (David Cross), their evil manager from the previous film, and his new find, The Chippettes. The boys much also deal with the social structure of school and popularity.

The first film while not high art, was a fun family film that had enough humor in it that appealed to both children, as well as their parents. The film relied heavily on the nostalgia of the Chipmunks from past. This film throws much of that out by relying more heavily on slapstick comedy, and replacing the emotional center of the film David Seville (Jason Lee). It is disheartening to see the core live action character that you get to know in the first film discarded and replaced with an actor that serves pretty much the same purpose.

This is a film high on acting talent, with little comedic effort shown. It seems many of the actors are merely phoning in their performances for the fat check they will receive for the sequels. None is this more blatant in than David Cross, who while a respected stand up comedian sets himself so far back on the comedic scale that it is actually embarrassing.  There were many beats where there was a pause for laughter, that was met only by silence from the parents and maybe a few chuckles by the children.

Zachary Levi plays much the same role as Jason Lee’s character in the first film, only with ramped up insecurity and an unhealthy obsession with video games.  He is one of the shining stars in NBC’s lineup with his hit show Chuck, but lacks comedic chops in this largely typecast role.

Which brings me to one major point I can’t wrap my head around. Why cast major stars as chipmunks? Justin Long, Christina Applegate, Anna Faris, and Amy Poehler all provide voices for chipmunks. They do not sing, only the voice acting. They aren’t advertised heavily in the marketing, why pay the salary when no one is going to notice?

Let’s get to the high points of the film. The singing and dancing, which is what everyone wants to see in a film like this. It is truly great to watch children get up and dance to songs. Unfortunately, these are the only parts of the film where I saw children exhibit the type of joy you would have hoped for them to experience.

The toe tapping numbers will keep most of the audience entertained, but ultimately the film falls short an almost all other counts. It is a shame that a sequel to a fun children’s film comes out so boring.

Note: It should be noted that I watched many of the children’s reactions around me during the screening I attended.  Some of them had fun, but didn’t seem to be enthralled with the picture. My friend’s daughter who went with us wanted to leave in the middle of the film. So, I do understand that this film isn’t one that is meant to connect with me, but it doesn’t seemed to have clicked with it’s target audience as well.