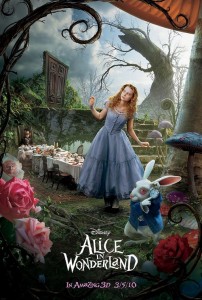 Tim Burton and Johnny Depp have re-teamed once again. This time they tackle an adaptation of one of Lewis Carroll’s most famous novels, “Alice In Wonderland.”

I first must tell you some of the 3D effects are great while others are lacking in the modern 3D era. Some of these effects are really messy. Burton filmed the movie first and then added the 3D effects, unlike Cameron’s Avatar which was filmed in 3D. Other than my problems with the 3D effects, I was really impressed – as I am in all Burton Films. The flourishing colors and characters were spectacular.

Now on to the story, which I enjoyed as well. Burton’s version of ‘Wonderland’ takes place 13 years after the original, with a more grown-up Alice (Mia Wasikowska). This Alice is grieving from the death of her father, and also about to receive a marriage proposal from a man who she doesn’t really want to marry. During the proposal, Alice spots the White Rabbit (Michael Sheen) and runs off to catch him – only to fall down the rabbit hole. Alice then meets Tweedledee and Tweedledum (Matt Lucas), Dormouse (Barbra Windsor), and the very colorful Cheshire Cat (Stephen Fry). This is where the Adventure really begins.

Alice is back in Wonderland for an adventure that is foretold, where she returns to help the White Queen (Anne Hathaway). To do so, she must face off against the ruthless Red Queen (Helena Bonham Carter). Of course in this adventure, Alice runs into the Mad Hatter (Johnny Depp). The character has a much larger role in this adaptation than ever before. Depp gives a great performance as the Hatter, except I would have liked to see him be a little crazier.

Alice meets many more creatures along the way to the end of this great feature. All of the creatures are done very well – for example, the Blue Caterpiller (Alan Rickman) who is a ‘Yoda’ type of character. The only Character I was disappointed in was the Stayne-Knave of Hearts (Crispin Glover). I thought he could have been more evil and vindictive.

I took my five year old daughter Addy with me to see the movie. I usually do so when I attend any type of kids’ movie. Addy ended up enjoying this one as much as I did. She kept her 3D glasses on for the whole show, and stayed interested throughout. That is huge for a five-year-old. There are some minor scenes that parents may not want not want their children to see, but none of them are too bad.

All in all, this film is very enjoyable and does a good job of taking the audience into another world. I really enjoyed Burton’s new take on Alice In Wonderland. So to all the fathers – if you want to take your wife and kids to see something enjoyable this weekend, the film is the perfect world of fun for everyone.

I would give “Alice in Wonderland” a B+. For children, based on the overall enjoyment my daughter had and the fact she is still talking about it – I would give it an A. 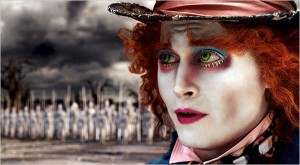 Tim Burton’s latest collaboration with Johnny Depp is a gigantic, uninspired, and boring mess of an adaptation of the Alice in Wonderland mythology.

The story is a sequel to Disney’s previous animated version of Alice in Wonderland and picks up some years later with Alice, now nineteen, about to be married off to the son of an old family friend that is very well to do but Alice is still haunted? By reoccurring “dreams” of her trip to Wonderland as a child. When the young man proposes to her in front of a giant crowd at a prearranged engagement party, Alice gets cold feat and runs off into the garden, chasing the white rabbit, and down into a rabbit hole and back into the world of Wonderland. The look of the place has changed significantly and we discover from a few familiar faces that there is a long standing search for Alice and they aren’t quite sure if this Alice is the real one. The prophecy is that Alice will return to Wonderland to rid it of the tyrant Red Queen and restore peace to the once jovial nation.

Now, I have a lot of problems with this film, but first and foremost I just didn’t find it at all that engaging or entertaining. When the film isn’t seemingly just walking down memory lane of Wonderland, and it does a lot of this for the first hour, the story they try to concoct is so unoriginal and uninspired it just never grabs you. The plot also has countless gapping holes in it, just ignores logic, and makes no sense on a number of occasions. From the desperate attempt to give the Mad Hater some depth to his character, the complete surface depth of the evil characters, the use of CGI for Crispin Glover’s body, and the fact that nobody in Wonderland seems to like the Red Queen yet she is some how in power, these are just the tipping point of problems I have without spoiling things.

Possibly my biggest issue with the film is Alice’s demeanor and logic on her being in Wonderland. She is convinced this experience is a dream, even though her old method of waking up from one doesn’t work. Also, she doesn’t seem to remember or recognize Wonderland, how is this possible? It doesn’t look all that different and she has previously told us that she is still having “dreams” about her first trip to Wonderland so why is everything so foreign to her? It takes 95% of the movie to unfold before she starts to finally come to this realization and I don’t know if she ever acknowledges that she really had been here before, but more or less just bought into the laid out prophecy.

Burton given this endless world of imagination brings next to nothing new to table and the film is creatively dry if you ask me. The moments that work in the film are re-hashes of the animated film, Cheshire Cat and the Blue Caterpillar are a pair of the very few highlights, and I just didn’t find the world incredibly rich or wondrous. Also of note, the use of 3-D is just as uninspired and pointless and not necessary for the viewing enjoyment of the picture. Avatar has spoiled us and I think a lot of the 3-D pictures this year will come across as a disappointment in that element as most directors are still trying to figure out how to use the medium. The CGI in the picture, especially for one that cost two hundred million dollars, was also not that impressive stylistically or consistently. There are a number of shots in the picture that do look gangbusters, don’t get me wrong, but for every winner there are two shots that look a little too eh. Danny Elfman’s score is even an uninspired and unnoticeable element to the film.

The acting work in the film is also nothing to write home about and none of the on screen actors do anything special for the entirety of the picture. Helena Bonham Carter is the highlight as the Red Queen but her part gets stale and repetitive in a hurry. Johnny Depp’s interpretation of the Mad Hatter is bad weird and never really worked for me as he tried to give him a dark side, or something, on the inside. The kookiness of the character never charms or is all that funny and it is probably one of the worst turns of the gifted actor’s careers. Mia Wasikowska stars as Alice and she is unfortunately really flat and has no pep what so ever in the picture. She dully delivers her lines and doesn’t have the cheery aloofness Alice has in the animated classic, Wasikowska does come a bit alive in the third act. Anne Hathaway needs to put her hands down, Crispin Glover does alright and kind of weird work, but most of the voice actors do solid jobs in their roles. Stephen Fry as the Cheshire Cat and Alan Rickman as Blue Caterpillar are the highlights of the voice actors, and the voice casting was one of the few things Burton got right.

In the end, Alice in Wonderland is nothing but a big mess. Where the original film was a crazy and tripped out adventure through this mysterious and wondrous world, Burton and company try and give this iteration a plot that is stale, uninspired, and unoriginal that leaves us scratching our heads. Beyond being unoriginal the film doesn’t really flow very well, idling with nothing much happening for the majority of the picture, and then tries to patch together a plot that makes no sense with gaping plot holes to get us to the finale. The acting is weak, the direction uninspired, effects that are dull, and 3D that is pointless and misused there is nothing to really recommend about this picture. A front runner for biggest flop of the year due to the talent involved, there are at least a couple characters and scenes worth checking out but this is a rental at best and the worst Burton and Depp film to date by a wide margin.

Alice and Wonderland is a F