Adventures of Power – Trailer and Clip 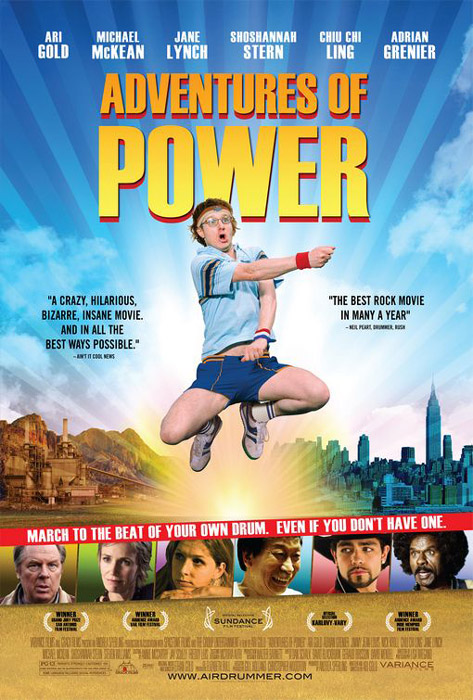 This quirky comedy could go one of two ways. It could be the next Napoleon Dynamite, although it seems to be trying hard or it could fall flat on its face from trying to be overly hip and quirky. Regardless, after watching the trailer and the clip I’m intrigued to see the full film. If nothing else once I am finished watching I could tell people about the messed up film I just saw.

When hard times hit a small mining town, Power (writer-director Gold) doesn’t wish for riches; he only wishes that he’d learned to play drums. But his father (McKean) could never afford to buy him a drum set, so Power has embraced the next best thing: air drumming. Tired of the constant ridicule, and with nothing but a few dollars, some breakfast cereal, and the support of his Aunt Joanie (Lynch), Power sets off across the country to the “paradise” of Newark, where an underground air drumming crew has invited him to join their team. But as the big air drumming competition looms, so does a rival—multi-millionaire drummer Dallas H. (Grenier), who thinks air drumming is an abomination and seeks to destroy Power and his crew. More than just a rock’n’roll comedy, ADVENTURES OF POWER is an epic fable about the American Dream—about making something out of nothing, and trusting in your own heartbeat as a way of changing the world. With a phenomenal soundtrack featuring original songs alongside hits by Rush, Phil Collins, the Dazz Band, and more, ADVENTURES OF POWER will have you drumming in your seat and cheering on your feet.

Check out a clip from the movie: