So far, the Cardinals have lost five home games.

So far, I’ve been at four of them. Perhaps the Cardinals should pay me to stay away at this point.

Went to the game Tuesday night with my ever-lovely friend Liz, but we had to leave after seven because I had to bartend. We managed to leave just after the Astros scored four thanks to a couple errors by Brendan Ryan.

Went again last night, sitting just a few rows behind the Astros dugout with my buddy Nick and a couple of also quite lovely ladies, Erin and Jacque. The Cardinals at least showed some resiliency last night, scoring five runs in the last four innings to make the game a somewhat respectable 9-6 final.

Once again, the main culprit was defense, as well as Kyle Lohse. Brendan Ryan has now committed four errors in the last two games, dropping his fielding percentage to .949. The losses, although not entirely his fault, were due in large part to his fielding, which is normally stellar. Ryan’s defense will come around, but you have to wonder if his hitting problems are finally taking their toll on his bread and butter. 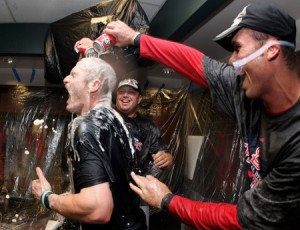 Maybe he's just had booze in his eyes the last couple nights.

Kyle Lohse once again served up a crap sandwich, as well. After giving up 5 runs (3 earned) in 4 innings against the Phillies, he served up 9 runs (4 earned) in 5 innings last night. After his excellent start against the Reds, it looked like he was finally turning the page, but he’s regressed back into the Achilles heel of the rotation.

The Cardinals have now dropped six of their last eight games, but there’s certainly no need to panic just yet, obviously. Ryan Ludwick is on one of his patented hot streaks, having hit .435 (10 for 23) during a five game hitting streak. Matt Holliday’s brought his average up 26 points in the last five games and has contributed an RBI the last two games. Albert Pujols drove in two runs last night. These three, along with David Freese, Colby Rasmus, and Yadier Molina, are the nucleus of the Cardinals offense. Just imagine if the six of them can get hot together.

Cardinals are getting ready to play a day game today, with Carpenter taking the mound, so you gotta like the chances of stopping the bleeding. The only problem is, the Cards are facing Bud Norris, a finesse left-hander who shut the Cardinals down the last time he pitched against them. Actually, the Cardinals are the only team he’s done well against this year.

Coming up, my next post will be an interesting one. A couple of weeks ago, ESPN picked the all-time Yankees and Red Sox teams and simulated a series against them. Certainly both teams have a rich tradition, but I think that other than the Yankees (and possibly the Dodgers), no team has a storied tradition like the Cardinals. So I’ll be posting my all-time Cardinals lineup and rotation. Stay tuned.