That’s all they needed. In a season where the Cardinals managed a total of 106 wins (regular and post-season), all they had to do was win two more, and the Commissioner’s Trophy would have found its way yet again to the Gateway to the West.

In 2011, they won a total of 101 and brought the trophy home. This team was five wins better, yet couldn’t get as far. What do the two have to do with each other? Nothing, really. I just thought it was interesting.

But that’s all in the past, right? The calendar’s turned, and we’re less than two weeks away from pitchers and catchers reporting.

And so, in the midst of all this ridiculous winter weather, my editors have graciously budgeted enough money to send me nowhere for the next month, forcing me to remain here while mother nature shakes her cold dandruff all over us yet again. Dammit, editors. I’m not bitter at all. [Editors’ note: Steve’s pay has been docked so WE can go to Jupiter. See you all in a month.]

But hey. We’re in this together. So instead of being warm, let’s look ahead to the 2014 season and what may come.

I’m gonna try and update this every day or every other day with a different position for each day. So get used to seeing my writing for a bit.

Note: if you get thrown off by some of the abbreviations or slashlines I use, you’re in luck! You can read my posts on baseball stats here and here. Go ahead. I’ll wait.

After posting a career year in 2012, it was inevitable that some of Yadi’s stats would decline. Overall, his OPS took a small hit, but his average went up and he did drive in more runs. He was tremendous with runners in scoring position, hitting .373, and he was one of the few Cardinals that hit well in the World Series, hitting .303 against Boston. 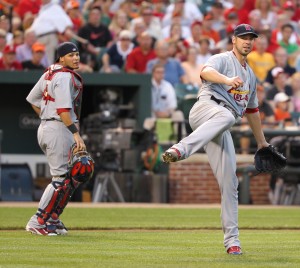 Yadier Molina watches on as Chris Carpenter lets fly with a throw to first and the gassy aftermath of the day’s lunch.

Yadi earned his sixth consecutive Gold Glove as well as his sixth Fielding Bible award, and it’s generally accepted he’s the best defensive catcher in baseball. Molina ended the season with the third-best catcher ERA in the majors (3.16) and among catchers who qualified for the batting title, he had the second-highest caught-stealing percentage (43.5%).