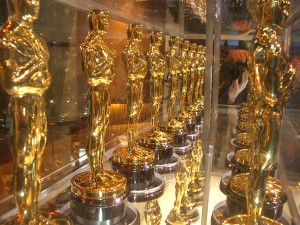 Tomorrow evening is one of the most exciting events of the entire year for movie lovers.  Film buffs and average theater-goers alike will have their eyes fixed to the screen tomorrow, in hopes that their favorite movie or actor will win an Oscar.

If you are throwing a party, going to a viewing event, or are simply watching the Academy Awards at home tomorrow night – make sure that you download a printable Oscar ballot (courtesy of ABC.com). The printable ballot includes a complete list of 2010 Oscar nominations, with a check box next to each nominee. Use it to try and predict the winners, and compare your choices to friends and family!
Download your printable 2010 Oscar ballot here!

I like this list, a lot actually, three of these titles are for sure in my top 10 of the year (that list will drop right before the Oscars!), another 3 could squeak their way into my top 10 and are firmly in the top 20 or less, and this is the first time my favorite movie of the year has been nominated since…2001 when Fellowship of the Ring was nominated.  The Blind Side is the “shocker” here and has no chance at winning but might mean a lock for Bullock in best actress.  The Hurt Locker and Avatar is the two horse race right now and while I both thought they were really good they aren’t my absolute favorites though I won’t be disappointed when one of these really good/maybe great films win.

These fell right in line with precursors but I would have loved to have seen Neil Blomkamp sneak in for District 9 as he is the reason a small budget movie with weird looking aliens in every shot is nominated for Best Picture.  Also, Tom Ford would have been an awesome sleeper, but that wasn’t a reasonable wish though Blomkamp was probably in 6th place.

Again no surprises here, Sam Rockwell for Moon and Sharlto Copley for District 9 would have been inspired and worthy choices and this race seems locked up, but I don’t think Bridges would make my cut of top five performances of the year with those two and three of the names on this short list.

I haven’t seen Last Station yet, so can’t talk to that, but Mulligan and Streep are my favorites from this category, though Bullock seems to be building up steam here.  Zoe Saldana would have been one of my wishful thinking nominations for Avatar as she was really great under all that digital make up and the performance capture process should really be viewed as an actor in make up.  Emily Blunt (Young Victoria) and Maya Rudolph (Away We Go) wouldn’t have been bad picks as well.

Damon deserved to be in for The Informant! over Invictus as he is superior in that leading role, but I am glad he is nominated.  The rest of these picks are solid, though haven’t seen Plummer yet, though Alfred Molina or Peter Sarsgaard from An Education would have been nice to have had in here. Anthony Mackie in The Hurt Locker has gotten overlooked, sadly, all season and Jackie Earl Haley from Watchmen would also have been a great wishful thinking pick here as well.

This award is all but wrapped up but it would have been cool if Diane Kruger or Mélanie Laurent got in from Basterds, and I would have taken Marion Cotillard over Cruz in Nine.

Where is Fantastic Mr. Fox?  The Road? Where the Wild Things Are? A Single Man? Julie and Julia? and dare I say Harry Potter and the Half Blood Prince?  I know I have some serious issues with what they cut, but it is one of the finer written of  the fantastic series.  (Also, Deathly Hollows gets a best picture nod next year or the following, one of the two parts will)

I like this list, not many complaints though I will say (500) Days of Summer should have been here.

Best Animated Feature Film
“Coraline”
“Fantastic Mr. Fox”
“The Princess and the Frog”
“The Secret of Kells”
“Up”

The Secret of Kells? Biggest surprise and out of nowhere nomination.  Don’t know if its any good or not, just saying, no one predicted this.

I can’t comment on these, though Sin Nombre deserved some love regardless.

A Single Man is beautiful, Anti-Christ as well should be here, and A Serious Man was also wonderfully shot by Mr. Deakins.  And again Mr. Fox show it some love here.

These hit all the fight beats, but I would give some love to the corduroy suits of Mr. Fox. (only half joking)

Not sure about Precious being in here, I would have given a nod to Star Trek, (500) Days of Summer,  A Serious and Single Men, would have been some good choices.

No District 9? Did you see his arm?

Go Michael Giacchino!  Where is nom for Star Trek though? (More Giacchino) and Clint Mansell for Moon?

I liked “Cinema Italiano” over Take it All, and both Voodo songs in Princess and the Frog over those 2.  Would have been great if Ed Helms got in for “Stu’s Song” in The Hangover though.

Transformers is a ridiculous achievement of visual effects no matter what you feel about the picture.

Best Documentary Feature
“Burma VJ: Reporting from a Closed Country”
“The Cove”
“Food, Inc.”
“The Most Dangerous Man in America: Daniel Ellsberg and the Pentagon Papers”
“Which Way Home”

Need to see most of these, only seen Food, Inc.