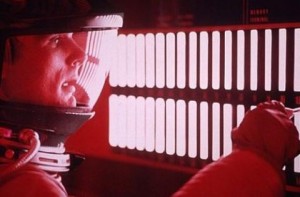 Roger Qbert was kind enough to point me to this news earlier today. Apparently a lost 17 minutes of edited footage that was removed slightly after its release from 2001: A Space Odyssey was found buried in a salt-mine vault in Kansas. To top it all off the footage was found perfectly reserved. Watching this print would be just as good as watching an initial print run from 1968.

All of this information was let out during a 70mm screen print showing of the film by documentary film makers Douglas Trumbull and David Larson. The pair showed audience members never seen before stills to plug their behind the scenes photo book, and to plug their upcoming documentary 2001: Behind the Infinite—The Making of a Masterpiece.

Currently there are no plans to release the footage, but now that word is out, I wouldn’t expect things to remain that way. I would at the very least expect it to be used in a special edition of an upcoming home video release. So, maybe there is something to look forward to for Kubrick fans and Blu-Ray enthusiasts alike.