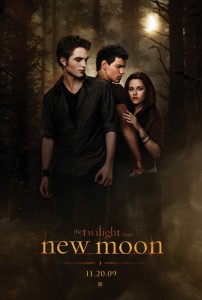 1. Hidden wolves – Look for an upside-down engraving of a wolf in the shot of the bowl in which Carlisle burns his first aid equipment; on Jacob’s t-shirt when he meets Bella in the school parking lot for the first time; and a wolf trinket on the dream-catcher that he gives her.

2. We did a little trick – when Edward gets out of Bella’s truck and they’re arguing. We wanted to show Edward moving impossibly quickly, so we put Rob right next to the camera but out of sight, and used a double dressed like Rob in the driver’s seat. When Edward gets out, it’s the double, and then Rob steps in front of the camera and it looks as if he’s got there faster than humanly possible.

Also, THE TWILIGHT SAGA iPhone Application will have an additional 5 exclusive facts from Chris’ list. Two of these five facts include the following:

1. You can see Volterra’s tower and the red-cloaked revelers from the festival of San Marco on the cover of Bella’s copy of Romeo and Juliet when she wakes up in her bedroom.

2. In the wolf-fight, we purposely knocked over the camera when the wolves tumble towards it; you can also hear the microphone thumping, as if an actual on-set animal had run into the camera and boom.