I think Tony La Russa and Ryan Franklin have a contract with electronics superstores. Seems like every time Tony puts him in to pitch, an inordinate amount of televisions end up with remotes getting thrown through them. 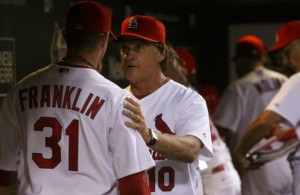 "Just a few more innings and we'll reach our bonus."

After last Saturday, the Cardinals were in desolate shape, dropping to 2-6 on the young season. Sorely missing the presence of Matt Holliday, the offense was anemic, never scoring more than four runs in a single game.

Once you add Matt to the mix, though…instant awesome.

The Cardinals went on an absolute offensive tear, winning six of their next eight. In the span of one week, the Cardinals scored 66 runs in seven games, or 9.4 per game.

Colby has been the single consistent bright spot in the lineup all season, and he has done nothing but support the idea that this is his breakout season. He leads the regulars (not including Holliday since he hasn’t accrued enough AB to qualify for the batting title) in average (.364), OBP (.440), slugging (.591), and OPS (1.031).

Funny how the doubters didn’t seem to be saying too much this past week. After starting off the season 6 for 40 (.150), Pujols went on one of his customary tears, going 10 for 27 to raise his average to .239. Obviously there’s still room for improvement, but Pujols is seeing the ball, and his average will continue to climb. I predicted on Facebook after Monday night’s game that his average would be over .300 in two weeks, so we’ll see after April 26 whether or not that holds true. Pujols also cranked three home runs and drove in six this past week, much more in line with his career numbers.

Perhaps the catalyst behind this offensive outburst, Holliday has given the Cardinals the protection Pujols needs. Upon his return, Holliday went 12 for 30 (.400), with five of those hits going for doubles. He’s also driven in seven and walked six times since coming back. He’s hitting .441, slugging .676, and getting on base at a ridiculous .558 clip.

I can’t really see how any other player will get the NL Player of the Week Award. Beginning Monday, Berkman went on an absolute tear, hitting 10 for 24 (.417). Six of those hits went over the wall, and he drove in 12 runs. Many people, myself included, questioned whether signing Berkman was a prudent move, but Lance appears to have allayed those fears for now.

When Adam Wainwright went down, the starting rotation, once considered an asset, became a giant question mark. Fortunately, the pitchers have so far picked up the slack. Apart from one outlier in Arizona, Chris Carpenter has pitched like a staff ace. Although he hasn’t recorded a win yet, he’s gotten three quality starts, and in those starts, his ERA is a sterling 1.35. Kyle Lohse has seemingly returned to 2008 form, winning his last two starts while giving up three earned runs in 15.1 innings. Jaime Garcia struggled in his last start, but still got the win. He leads the team with two wins, and his ERA of 1.35 leads all starters. Kyle McClellan, thrust into the role of the fifth starter, has pitched superlatively, also winning two while compiling an ERA of 1.89 in 19 innings. The lone pitcher who’s struggled is Jake Westbrook, and he’s shown improvement the last two starts.

St. Louis, meet your new mancrush. Sanchez, just 22, was called up to the big team after injuries to two of the relievers, Bryan Augenstein and Brian Tallet. Touted as the closer of the future, Sanchez has made two appearances thus far, and while they were in low pressure situations, Sanchez absolutely dominated. In three innings of work, Sanchez has given up two hits, no runs, no walks, and eight(!) strikeouts. If he continues to pitch like this, he will create a positive dilemma when the other pitchers are ready to return from their injuries.

The Cardinals admitted before the season began that they would be giving up some defense for an offensive upgrade. This last week ably demonstrated why, but defense is still not to be overlooked. Pujols, normally a defensive stalwart, has committed three errors thus far in the season (he committed four all of last season). The biggest off-season question was Ryan Theriot, and he’s done nothing to alleviate those fears. He committed his fifth error of the season today, and although he has contributed offensively, shortstop is one of the few positions where defense takes priority. It will be interesting to see whether his offensive assets will outweigh his defensive liability.

I admire loyalty. I consider it to be one of the most important traits in a person. Tony La Russa has a reputation of unwavering loyalty in his veteran players. And a part of me can understand his desire to let Franklin work his problems out. In the last two seasons, he accrued 65 saves against seven blown saves.

But this season has started off as a nightmare for Franklin, and after today, his confidence has to be absolutely shot. His ERA stands at 11.57, and his WHIP is 2.14. On the plus side…umm, well, according to ESPN.com, he’s tied for 7th in the NL in complete games (with zero). Sanchez most likely won’t get the opportunity to close until he’s a little more seasoned, but there are several closers behind Franklin who could earn the chance, in particular Mitchell Boggs (2.00 ERA, 12K in 9IP), Jason Motte (2.57 ERA in 7 IP), and Miguel Batista (1.29 ERA in 7 IP), who was the closer for Toronto in 2005.

The Cardinals finished their ten game roadtrip 8-8, although they could easily be 11-5 or 12-4. It’ll be interesting to see which team shows up this homestand, the 2-4 team from the first week or the 6-4 team from the last week and a half.