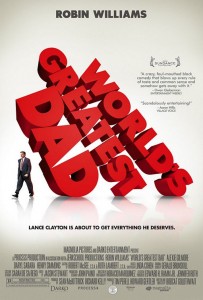 Bobcat Goldthwait’s latest film is a pitch black comedy revolving around the struggle of a writer who wants to be famous and the revisionist history nature of high school and the results are a solid effort that tells a touching if a bit disturbed story of family.

Goldthwait’s film revolves around a single dad, Lance, and his annoying douche of a son, Kyle, and Lance’s attempt at being a good father to a son that has no desire or direction.  Kyle is sex obsessed, talks a game a million times bigger than he really is, and treats his only friend and father like dirt; unless the conversation revolves around something involving sex.  Lance is an English teacher whose elective poetry class is unpopular and he views himself as more or less a failure as he has been rejected by every publisher and magazine under the sun.  When an unfortunate circumstance arises in the family’s life Lance is given the opportunity to share his literary voice in a new way that creates adoration for Kyle.

Now, I am being particularly vague for good reason and am going to do my best to not spoil any events in the plot beyond what I have said, so I apologize for things being a bit unclear at times.  The themes Goldthwait tackles in the film are many you do not see and are poking fun at a process that many will find offensive.  But grieving, celebrity, and posthumous idolization are all ripe for parody as more often than not events surrounding an event like the one in the film are completely shameless and full of B.S. coming out of a lot of people’s mouths.  Goldthwait skewers these topics with ease and you have to agree with a lot of his observations and parody of the subject.

High school is always a great setting for black comedy and the filmmakers do a great job of exploiting and making a bit of fun with a lot of conventions you find in films of this nature and really focus on the pettiness of individuals even in the face of adversity.  From the romantic flip flops of Lance’s love interest to Lance taking serious advantage of his situation, the film has a lot to say about people that exploit pain and tragedy to their benefit and contrive themselves into thinking what they are doing is ok.

Robin Williams is very good as Lance and gives one of his most subdued performances in ages not going over the top as he usually does in films.  A real portrayal of a man trying to come grips with his life and he does a great job with Lance as he deludes himself on his way to fame.  Kyle is played to great effect by Daryl Sabara, incredibly annoying to the point you just want to punch the kid in the face he plays the part to a T.  Alexie Gilmore as Claire, Lance’s flippy flop girlfriend, catches the spirit of the character perfectly and she does a great job at playing up the absurdity of the pettiness people can have.  The rest of the ensemble does a nice job at capturing the spirit of Goldthwait’s script as well with everyone in on the bit of tongue in cheek nature of the film.

In the end, World’s Greatest Dad is a successful dark comedy that is full of biting commentary on high school and people in general.  The film will touch a lot of sensitive subjects for some people but has no problem making fun of them with ease.  Goldthwait’s film is a promising step for the director/writer and I am looking forward to his next project.  As this stands, the film is a great showpiece for Williams and has a lot of smart things to say about some really ugly things about humanity and high school that holds it together to the end while almost becoming a bit droll.  Either way, fans of dark comedy should definitely check it out.

World’s Greatest Dad is a B-