Today marks the grand opening of the Wildwood 10, filling a gap that has been empty for far too long in the area. B&B Theatres, a family owned and operated company celebrating 86 years in the industry, brings us this state-of-the-art theater that makes no compromise when it comes to comfort and convenience.

Located in the heart of Wildwood’s new town center, the theater features 10 all-digital screens – including two unique 21-and-over auditoriums called “The Marquee Suites.” The two theaters are connected with their own lobby, featuring a full bar and food menu. Inside each of the Marquee Suites are pairs of extremely comfortable leather recliners, joined in the middle with a convenient granite tabletop. But don’t worry – patrons won’t have to worry about a waiter interrupting in the middle of a movie. Food and drinks are ordered in the lobby, and brought into the theater by each moviegoer (in a similar fashion to any standard concession stand).

The largest auditorium in the Wildwood 10 is known as the “B&B Grand Screen.” The theater features a unique stadium seating configuration, where each row of seats is about six inches higher than most auditoriums. This allows for unobstructed viewing for movie-lovers of all sizes. The Grand Screen is also the only theater in the St. Louis area to feature Dolby 7.1 sound – including a complete 360 degree immersion of sound (including speakers on the ceiling). The digital projection is magnificent on 56-foot-wide screen, which stretched from wall to wall across the beautiful theater. And the 3D presentation is something that is not to be missed. 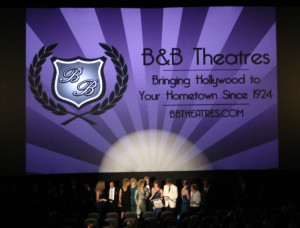 The Bagby and Bills Family, along with the B&B extended family, cut film to mark the grand opening.

A red carpet gala and film cutting was held Thursday night to mark the opening of this monumental theater. It was truly refreshing to see how closely involved the family is in the operation of such a large chain of theaters. The Wildwood 10 is just one of the company’s 30 theaters, but that didn’t stop the entire family from being in attendance. The Chairman of B&B Theatress, Elmer Bills, told the story of the company’s history and how his father started it in 1924 after high school. “…while he was riding on the train to Marshall, MO where he was attending Missouri Valley College, he noticed that the theater in Glassgow, MO was for sale,” said Bills. “He got off the train, and he bought it… it wasn’t quite that simple, but just accept that,” he said jovially. He then went on to tell the story of how in the days of silent theaters, the piano player came with the building. She became his mother, and 86 years later there stood 4 generations of the Bills and Bagby families in the newest theater. It was a touching moment to be a part of, and everyone in attendance could tell that this was a family that truly has a passion for movies.


Ticket Prices are modest for today’s rates, and the Wildwood 10 has a plethora of valuable options for the price-conscious moviegoer. Any show before 1pm is only $5 on any of the 8 traditional screens (non-Marquee Suites). 7 days a week, 365 days a year. Matinee Adult and Senior tickets only jump up to $7.25, and evening shows are 9.50. Of course 3D shows are going to include a small surcharge of $3, but that is going to be found anywhere. The price of the Marquee Suites is only $10 until 4pm, where the price goes up to $12 (same 3D charges apply). Another bonus is that tickets and concessions can be purchased at the same time, to avoid extra wait times and transactions.

The Wildwood 10 is a breathtaking theater, that takes you back to the way theaters used to be – without losing the comforts and features of a modern theater. It is a tremendous amalgamation of a classic, hometown feeling with state-of-the-art technology. I wouldn’t consider any of the 10 screens to be small, and there doesn’t seem to be a bad seat in the house. Bringing Hollywood to the people of Wildwood, Ellisville, Ballwin – and all of the surrounding areas, the B&B Wildwood 10 is just what we needed. 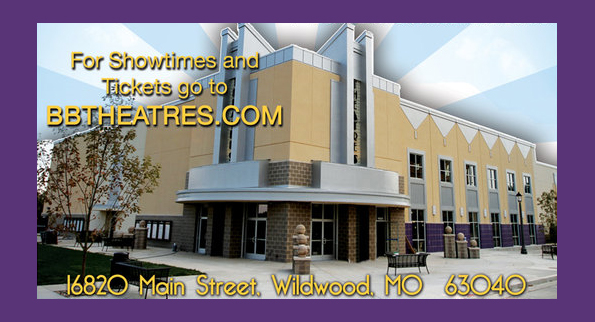 Enter to win a pair of tickets to the Wildwood 10! Become a fan of ReviewSTL on Facebook and suggest ReviewSTL.com to all your friends (click the “suggest to friends” link on the left side of the page). Then post a comment on the ReviewSTL fan page telling us about your favorite memory from going to the movies! NO PURCHASE NECESSARY. PLEASE REMEMBER TO READ THE RULES! And don’t forget to visit the new Wildwood 10!