Who is Captain America? Chris Evans It Would Seem. 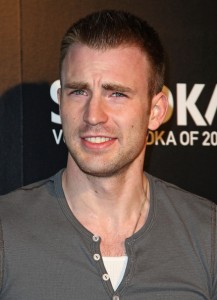 Try finding a shirtless image of Evans on the web that isn't shirtless. C'mon, I dare you!

I hope Chris Evans loves the Marvel Universe, because it looks like he is going to be stuck in it for a while.  Chris Evans has been rumored since Friday to be the choice for The First Avenger: Captain America movie. This would be his fourth major role in a comic book film, after the two Fantastic Four films, as well as his upcoming action film The Losers. Marvel has yet to comment, but that is most likely because they are probably waiting for everything to go down in writing.

Chris Evans was a latecomer to the Captain America test screenings. (Read about the early choices here.) Many people never threw his name into contention since he has already been tied to one Marvel franchise. He played Johnny Storm, also known as the Human Torch, in the somewhat lackluster Fantastic Four films. If he takes the role the actor will be tied to three Captain America movies, plus a starring role in the upcoming Avengers movie where he would receive top billing alongside people like Robert Downey Jr. and Samuel L. Jackson.  He would probably also make cross over appearances in other films within the Marvel Universe. So, this would limit his career choices over the next decade or so.

Personally, he is about as solid of a choice as any of the other names that screened for the part.  He physically looks like he could carry off the role, although I think he might have to bulk up a bit. I am a bit more used to him playing snarky characters, and don’t usually see him as a commanding presence. I’m willing to give him the benefit of the doubt though. It could be he has just never had a role that offered him the opportunity.

What do you think of the casting choice? Is there someone you think would be better?

Note: I know a lot of people keep throwing around names like Mark Valley, Aaron Eckhart, and Brad Pitt, however, these actors are way too old for the role now. I totally agree that they would all make an awesome Captain America, though.