When a Luxury Becomes a Necessity: Cardinals Forced to Lean on Pitching Depth

First off, let me wish you a happy Memorial Day weekend. It’s unlikely I’ll update before Monday, but I hope you take time to reflect on why most people get a holiday Monday. The sacrifices of those who gave their lives in service to this country, whether you agree with the cause or not, should never be diminished.

At the outset of the 2013 season, the Cardinals had one huge advantage over everyone else: the depth of its pitching prospects in the minor leagues.

I mean, just think about it. Even with the loss of Chris Carpenter, the Cardinals rotation was pretty set. Adam Wainwright was primed to bounce back from Tommy John. Jake Westbrook has been a reliable if unpredictable presence in the rotation. Shelby Miller dazzled in his debut last year and looked to build upon his growth. Lance Lynn started strong, faltered in the middle, then finished strong last year, and with his off-season workouts lost a buttload of weight. Jaime Garcia, when healthy, has been one of the best lefty starters in the majors since his debut.

And then, look at the bullpen! Just look at that thing. 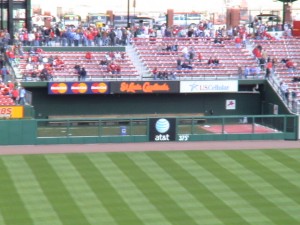 Trevor Rosenthal throws smoke. Joe Kelly was a dependable starter last year and can hit the mid-90’s with his fastball. Edward Mujica was a revelation after his trade from Miami. Mitchell Boggs led the Cardinals in holds last season and was selected to pitch for Team USA in the World Baseball Classic this spring. Jason Motte tied Craig Kimbrel for the league lead in saves last year.

Down in the minors, the Cardinals had a stockpile of arms ready to go in case someone faltered. Carlos Martinez has been touted as the second-best pitching prospect in the organization. Yadier Molina caught Michael Wacha this spring and said he was ready to pitch in the majors right away. John Gast started the season at Memphis. Seth Maness has had record-level control, walking 0.7 batters every nine innings. Kevin Siegrist is being touted as an up-and-coming closer at Springfield. Regardless of what happened on the field, the pitchers were SET.