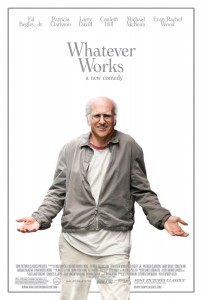 Woody Allen returns from Europe and heads right back to New York City in this “classic Allen” tale that allows Larry David to be exposed to a bigger audience then HBO for the hilarious and brilliant man that he is.

Boris Yellnikoff is a genius, a self proclaimed genius at that, and was once almost nominated for a Nobel Peace Prize. He lives out his days since his first divorce making conversation, or should we say yelling at, with friends over racism, the failure of our species, and the strangle hold of religion among many other things in between his sessions of teaching children chess. One day when returning home, a young southern girl right off the bus asks him for some food and a place to stay. After insulting her intelligence, ability, and almost everything about her he agrees to help get her on her feet and in turn shows her around the city a bit. Well a month goes by and the girl, Melodie is still around and even taking on a bit of Boris’ philosophy on life. In the meanwhile, Boris’ mates begin to wonder why he hasn’t kicked her to the curb yet and Boris begins to wonder that himself. But living by his almost born again philosophy, “whatever works,” his and Melodie’s deal carries on and eventually even begins to grow.

Now, if you have ever seen a Woody Allen film before you know for the most part what you are getting into. Older guy, younger girl, things might happen while analyzing of society and romance ensue. Allen loves these themes, and while he hasn’t been as “conventional Allen,” about it as of late he still is looking at these themes. Well the results here is his funniest film in years and while maybe not as skillfully made as Match Point and Vicky Cristina Barcelona, I found myself laughing out loud consistently here, especially at just about everything out of Larry David’s mouth.

Now I will throw out this warning, if you are religious, to the right, or don’t enjoy the dissecting of the social ignorance of our species, and don’t have a sense of humor about yourself and these themes, and you probably don’t if you fall in these categories, then this might not be your cup of tea. David spouts fire at the dimness of our society and makes us, rightfully so, look trivial and pathetic; and Allen doesn’t even touch on our obsession with celebrity and pseudo-celebrity which is beyond appalling in its own right. I found a connection with Boris and agreed with him on just about everything he said and that really helped me enjoy the film a great deal.

In fact, the film only ever really waivers when Boris leaves the picture. The film’s focus shifts towards Melodie in the beginning of the third act and I am not sure this was quite the best choice. The film redeems its misstep in the end, and actually Boris is a background character for almost the entire third act, but the other characters lives we focus on are thankfully a bit more compelling than Melodie’s odd departure.

Larry David as I mentioned is just great and right at home working off of Allen’s material and I am here to report that he isn’t just playing Larry David in curb here. Sure there are comparisons to be made, but Boris is more forward, brash, and pessimistic than the character Larry David and the actor Larry David creates something original if still familiar; and always hilarious.

Evan Rachel Wood is a lot of fun as the sexy southern dim witted belle that allows for Allen to basically assault the ideals of the church going, gun totting, right wing south and the amount of comedy that comes from the ignorance should be a wake up call for anyone that connects with any of the characters that fall into Melodie’s camp. Wood disappears into the character and hits most notes just about right and on the money with only a couple missed beats along the way.

Patricia Clarkson steals the show and doesn’t show up for almost two thirds of the film. When she does show up though, she bursts onto the scene and will have you laughing at every little turn her character takes. Same goes for Ed Begley Jr. who steps right in and steals the spotlight in even less screen time than Clarkson. In fact, both of the characters take similar paths once they show up and the way Wood mirrors their arcs Begley’s is able to be told quicker and remain fresh and funny.

In the end, Whatever Works is an often hilarious look at love, romance, and society. David doing Allen will have you laughing out loud from nearly start to finish and while the film waivers a bit at the beginning of the third act it rights itself by the end. Allen could have finely tuned his film a bit more as well I imagine a trim here or there might have helped a bit, but he achieves what he set out to do and that was make you laugh and you will do that aplenty. Skewering the idiocy of this country and ourselves while basically calling for everyone to just relax a bit and do whatever works instead of forcing what we are “supposed” to do, I couldn’t agree more and if you feel the same as me you will quite enjoy Whatever Works.

Whatever Works is a B+