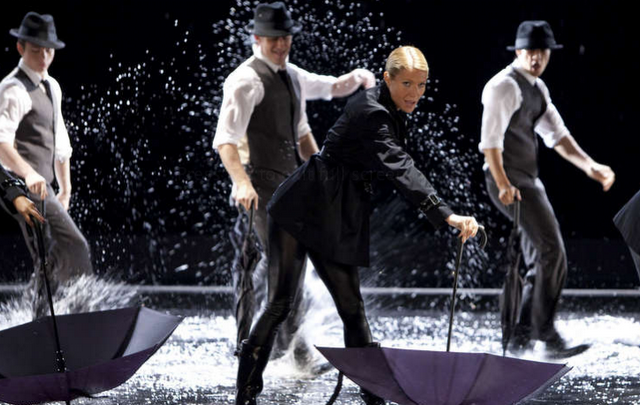 Gwyneth Paltrow joined the Glee cast this week as Ms. Holly Holliday, the substitute teacher. The turn of events that brings Ms. Holliday into William McKinley High involves a bizarre strain of “monkey flu” that not only strikes Mr. Schue, but also Principal Figgins. The absurdity of this plot device, which is established within the first few minutes of the episode is only topped by Sue’s one liner that goes on to establish how she has assumed Principal Figgins’ position. This would be an issue if Glee was a show where logic and realism mattered.

With B and C story lines about Sue’s mission as principal to ban junk food and Will’s dysfunctional relationship with his ex-wife Teri, this week’s episode was really about showcasing Ms. Paltrow’s singing talent…and I gotta say, she doesn’t disappoint. Gwyneth shows her chops and more than makes up for her less than stellar performance at the CMA’s. Maybe it was the song Country Strong that just didn’t do it for me, but I’d go one step further and say that it was the genre. She just doesn’t have a Country voice and Glee this week proves that. Her best performance in the show is “Forget You” by far. While her limited range really only showcases how talented the Glee kids are, it still doesn’t hurt the performance. Her character represents complete release of inhibition…a trait Ms. Paltrow has come to personify in most of her roles, I was equally as struck by her singing talent as I was of her ability to “let her hair down” and let loose. This is not Two Lovers Gwyneth Paltrow or even Iron Man Gwyneth Paltrow, this is a role that I don’t believe I’ve ever seen her portray before…but she does it and she completely owns it. If her venture into Country music doesn’t pan out, she may want to give Pop a chance before she calls it quits.

As a whole, this week’s episode does what it intends to do…entertain. Gwyneth Paltrow rocks in all her performances and the increasingly elaborate set pieces looked astounding. (Was the choir room floor really supposed to be flooded with water for the “Umbrella/Singin’ in the Rain” mash-up?) I suppose the only lull was Mr. Schue and Mike’s performance of Make Me Laugh, which as stated in the episode is kind of out of date…screw it, it’s really out of date and felt even more out of place with so many more contemporary songs.

Am I off base or on target? Let me know in the comments section below.