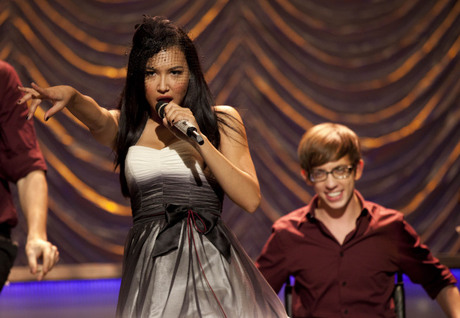 The Glee kids were off to sectionals this week, but not before learning a valuable lesson about team spirit…a lesson that took about three quarters of the episode for the kids to learn.

The episode starts with Mr. Schue discussing the upcoming Sectionals competition with colleague and love interest Emma Pillsbury. She inspires him to abandon the format of using Broadway-bound Rachael Berry and her boyfriend Finn to headline their performance – instead he turns to the “untapped talent” of the other Glee members. Brittany S. Pierce receives a “magic comb” to help her dance her best and only after losing said comb does she realize she had that ability all along…a touching moment indeed and after two speeches from Mr. Schue about him being sick of the “I” mentality and something about an overweight female wrestler joining the Glee club we finally arrive at the actual competition, which pays off pretty well.

Joined at Sectionals alongside our protagonists New Directions are a geriatric glee club who are apparently earning their GED’s and Kurt’s new school, The Dalton Academy Warblers. The geriatric Hipsters are really nothing more than a decent sight gag with good voices…they’re forgettable to say the least. The Warblers showcase their tremendous voice talent alongside a refreshing arrangement of Train’s Hey, Soul Sister. New Directions performs (I’ve Had) The Time of My Life of Dirty Dancing fame (Hey, didn’t The Black Eyed Peas just sample that in their new song that they released a few weeks ago…what a coincidence) and the lesser known, but equally triumphant Valerie, originally by The Zutons. In spite of the sarcastic remark earlier regarding the team’s new “team spirit” it is refreshing to be reminded just how talented the other Glee kids really are. Sam and Quinn shine in their Dirty Dancing moment and Santana, Brittany and Mike Chang really stand out in Valerie. It should also be noted that while it wasn’t part of the competition, Mercedes and Tina’s rendition of Florence + The Machine’s Dog Days are Over was pitch perfect…even if the rationale for the kids to sing it was a little hackneyed.

Aside from Rachel getting increasingly unlikable, Kurt’s awkward entrance into Dalton and the episode’s overall tendency to tread water until it was time for the actual competition, it was a good episode. It does what Glee is meant to do – offer a few good laughs, advance the narrative and most importantly showcase some damn fine music.