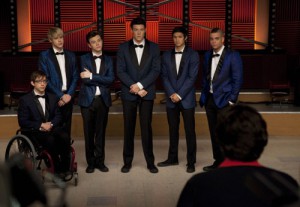 Glee returned tonight after an election related week off and showed what it seems many viewers had been missing…a return to form. After the Rocky Horror episode two weeks ago, Glee brought the viewers back to main story arc where Puck is out of juvie, Sam and Finn aren’t “getting any” and Kurt is back to being bullied by the big bad football jock (more on him later).

The biggest news leading up to tonight’s episode is that tonight signals the return of Puck. After leaving to promote his new album…err I mean “being sent to juvie” Puck returns, mohawk and all and does his best to convince his classmates that he ruled the juvenile detention center where he was being held. Unfortunately, actor Mark Salling doesn’t do as good of a job convincing audiences that he’s not still focused on his real-life album…tonight Salling phoned it in.

What helps tonight’s episode is that everything else makes up for it, especially the story involving Kurt. Kurt finds himself being bullied for being gay and in a convenient turn of events finds himself at an all-boys school to “spy” on the competition. There he finds an environment and a culture that not only tolerates individual differences but embraces and celebrates them.  Kurt can hardly believe that students at this school are able to be friends and be open about who they are regardless of their interests or sexual preferences, and not only that, but their glee-kids are described as “Rock Stars.” Unfortunately the private schools tuition makes it impossible for Kurt to attend, but that doesn’t stop one of their students from helping him stand up to his bully…a bully that may have ulterior motives for being so visibly and persistently homophobic. (hint-hint, wink-wink)

By taking the total number of songs down to four and integrating touching stories about two of the characters first kisses, Glee comes out on top this week and is hopefully back on track to continue with the season.