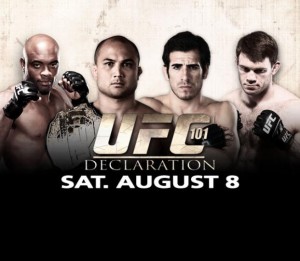 The Ultimate Fighting Championship® makes its Philadelphia debut on Saturday, August 8th for UFC® 101: Declaration. In the main event, the two best 155-pound fighters in the world finally meet when UFC® lightweight champion BJ Penn looks to defend his crown against number one contender Kenny Florian. Penn has never lost at 155-pounds, and Florian is looking to change that stat this summer.

In the co-feature, the pound-for-pound king of mixed martial arts, middleweight champion Anderson “The Spider” Silva, tests the waters at 205 pounds once again when he battles former light heavyweight champ and Ultimate Fighter season one winner Forrest Griffin.

Click Here to watch on Yahoo! Sports – $44.95 gets you the live event plus 24 hours of unlimited archive viewing

Click Here to watch on UFC.com – $44.95 gets you the live event plus 24 hours of unlimited archive viewing